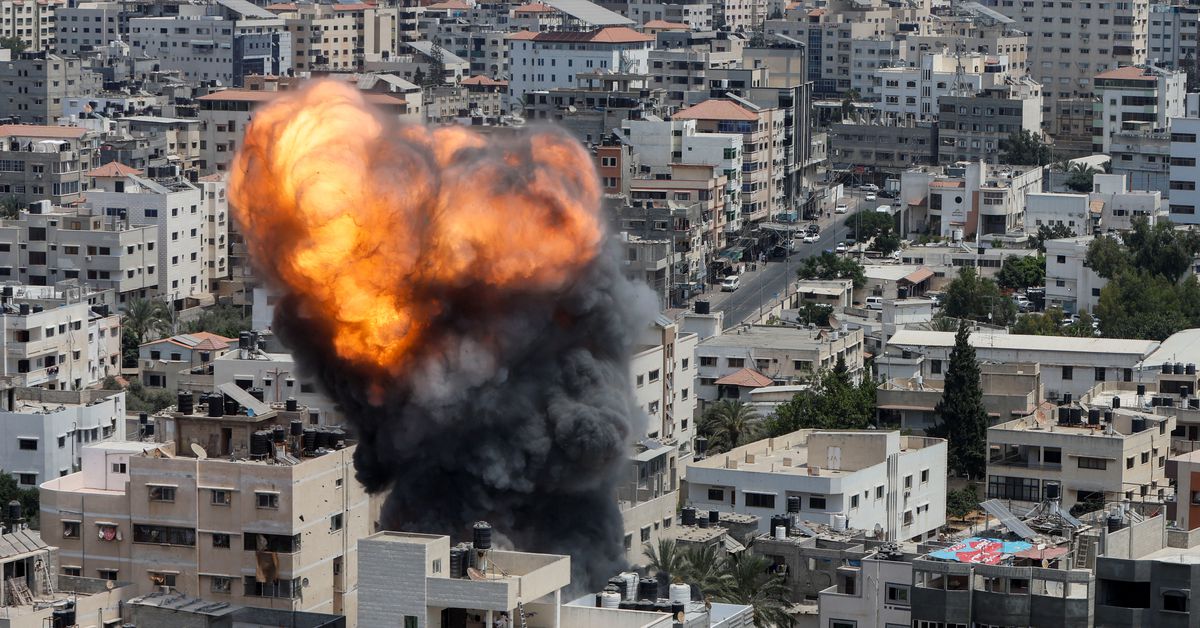 Hamas, the Islamist group that controls the enclave, said the children were among the dead in an explosion near the Jabalya refugee camp and blamed Israel. The Israeli army denied responsibility, saying the explosion was caused by a failed launch of an Islamic Jihad rocket.

He released a video that appeared to show a rocket launched from Gaza at night, then immediately veering off course towards a built-up area. Reuters could not independently verify the images.

As Israeli strikes continued, hitting what the army believed to be hidden arms depots in residential areas and destroying a number of homes, Islamic Jihad fired salvoes of rockets into the Israeli commercial center of Tel Aviv.

At least 24 Palestinians, including six children, were killed and 203 injured during the two days of shooting, according to Gaza’s health ministry.

Palestinian militants fired more than 400 rockets into Israel – most of them intercepted, setting off air raid sirens and sending people running towards bomb shelters. No serious casualties were reported, the Israel Ambulance Service said.

Egypt said it was engaged in intensive talks to calm the situation. Further escalation would largely depend on Hamas deciding to join the fighting alongside the small Islamic Jihad group.

An Egyptian intelligence delegation led by Major General Ahmed Abdelkhaliq arrived in Israel on Saturday and will travel to Gaza for mediation talks, two Egyptian security sources said. They hoped to secure a one-day ceasefire in order to complete the talks, the sources added.

“Intensive efforts have been made this evening and the movement has listened to the mediators, but these efforts have not yet resulted in an agreement,” an Islamic Jihad official told Reuters on Saturday evening.

The cross-border clash, which shattered more than a year of relative calm around Gaza, began when Israel launched a surprise attack on Friday, killing a senior Islamic Jihad commander and hitting a series of what it said were military targets.

Flame and smoke rise during an Israeli airstrike, amid fighting between Israel and Gaza, in Gaza City August 6, 2022. REUTERS/Mohammed Salem

Around 2.3 million Palestinians are crammed into Gaza’s narrow coastal strip, with Israel and Egypt severely restricting the movement of people and goods in and out of the enclave and imposing a naval blockade , citing security concerns.

Israel halted the planned transport of fuel to Gaza shortly before it struck on Friday, crippling the territory’s only power plant and reducing electricity to about eight hours a day and drawing warnings from health officials that the hospitals would be badly affected within days.

The border has been largely quiet since May 2021, when 11 days of fierce fighting between Israel and militants left at least 250 dead in Gaza and 13 in Israel.

The United States fully supports Israel’s right to self-defense, the US State Department said on Saturday, and it urged all parties to avoid further escalation. Read more

UN and European Union envoys to the Middle East have expressed concern over the violence, and the Western-backed Palestinian Authority has condemned Israel’s attacks.

The streets of Gaza were largely deserted on Saturday afternoon. At the site where Islamic Jihad commander-in-chief Tayseer al-Jaabari was killed, rubble, glass and furniture littered the street.

In Israel, streets in border towns were largely empty as rocket-ignited bushfires spread into nearby fields.

Islamic Jihad said it fired a missile at Israel’s main international gateway, Ben Gurion Airport, but the rocket fell about 20 km (12 miles) away. The Civil Aviation Authority said the airport was operating normally.

Tensions rose this week after Israeli forces arrested an Islamic Jihad commander in the occupied West Bank, prompting threats of reprisals from the group. The military said it apprehended 19 other members of the group there on Saturday.

Israel’s defense minister said dozens of the group’s rocket installations in Gaza had been destroyed.

Prime Minister Yair Lapid, who faces an election in November, said the operation thwarted an imminent attack by Islamic Jihad, which is backed by Iran and designated as a terrorist organization by the West. Read more

A senior correspondent with nearly 25 years of experience covering the Palestinian-Israeli conflict, including several wars and the signing of the historic first peace agreement between the two sides.