Art Reviews: John Patrick Byrne: A Great Adventure | John Byrne, This is not a retrospective 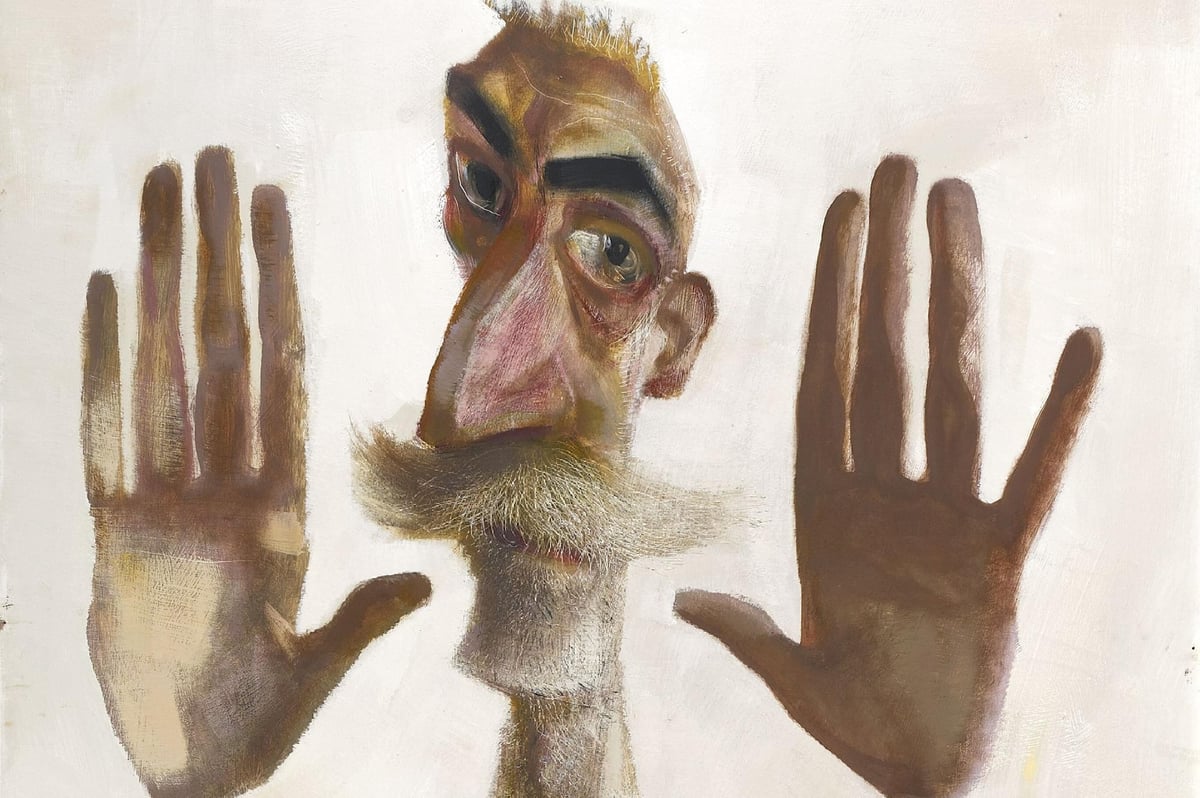 Art Reviews: John Patrick Byrne: A Great Adventure | John Byrne, This is not a retrospective

Hands Up by John Byrne, part of John Patrick Byrne: A Great Adventure at Kelvingrove Art Gallery and Museum

John Byrne, This is not a retrospective, Fine Art Society, Edinburgh ****

Register to our daily newsletter

John Byrne is a metamorph, a man in constant metamorphosis, or at least that is how he presents himself in the self-portraits that are at the heart of his work. In his major retrospective in Glasgow, John Patrick Byrne: A Big Adventure, there are over 40 and there are another half-dozen in the smaller concurrent exhibition at the Fine Art Society in Edinburgh. Rightly perhaps, the latter is also a shape-shifting spectacle. As the works have sold, the walls have changed, but it nevertheless complements the Glasgow exhibition very well. Going back to all those self-portraits, though, there’s nothing conceited about them, nor do we seem to be witnessing any soul-searching going on. They’re more like masks he’s trying on, though you sense that what’s behind the mask may be as much of a mystery to him as it is to us.

In early examples like the famous Self-Portrait in a Flowered Jacket, or the life-size diptych, Self-Portrait with a Red Palette, he appears romantic, yet withdrawn and watchful. Even so, they are often not straightforward. In this last image, for example, the left half of the diptych is just a blue wall. He’s in the right half, but he looks like he’s not at all sure to stay to paint. In 1975’s The Studio, Glasgow hung among the self-portraits, although there is ample evidence of his presence in the cigarette butts on the floor and his scattered painting materials, he himself disappeared. It is the painting of an empty room. In his later self-portraits, he assumes all sorts of disguises. He is a sailor, or a cat-burglar, or is haunted by his skeletal alter ego. Often he is holding a cigarette and surrounded by smoke rings. In one photo, he looks at us, his hands raised as if pressed against a windowpane between us. In another, his only visible eye, albeit in shadow, stares at us with uncanny frankness, but as time goes by he becomes increasingly gaunt and melancholy. In the most recent self-portrait, which is in the Fine Art Society, everything is black and white except for a red sun and his red-rimmed eyes, and he is descended to the very bottom of the image.

Also at the Fine Art Society in a particularly beautiful self-portrait against the backdrop of the night sky, a label he holds in his hand cryptically reads “This is not a self-portrait”. Indeed, the whole show at the FAS is called This is not a retrospective. The retrospective is in Glasgow after all, but both titles play on Ceci n’est pas un pipe, a famous work by one of Byrne’s heroes, the surrealist painter Magritte. He wrote to Magritte when he was a desperate young artist and received a long thoughtful and encouraging response and now if you could ever categorize him as an artist it would be as a surrealist. His reality is fluid as was theirs. He also engages in dreams and mental states and sometimes nightmares. In North East Apocalypse, for example, under an apocalyptic sky, vengeful skeletons straight out of Bruegel’s Danse macabre attack helpless people.

Byrne is dizzyingly protean in the styles he deploys. It can be painted as almost invisible in a cloud of smoke using the divided color of the Neo-Impressionists, or even perfectly recognizable in the disjointed forms of Cubism. There’s even a large portrait here of the trustees of the Hamilton Bequest neatly done in the academic style of a boardroom commission. The money from it funded his first play, Writer’s Cramp, at Edinburgh’s Traverse in 1977 – more moody.

In the 1960s, after Glasgow School of Art, Byrne began his career, or at least he launched his success with a bold shape-shifting piece. Struggling as artists then did, he taught part-time, but to make ends meet he also had to return to the carpet factory where he had been a colorist, one of the slab boys immortalized in his play The Slab Boys. A very beautiful painting entitled Le Jardin de nuit and another representing an owl, both from this period, clearly show the influence of the poetic paintings of Douanier Rousseau. He was the most famous naive artist in history. This may have given Byrne an idea, because in 1967 he sent a work to a gallery in London claiming it was by his father, a naive painter called Patrick Byrne. A long letter on display at the Fine Art Society to Mr. Lister at the Portal Gallery is a long fiction about his father’s difficult life and the lonely solace of his paintings. It’s clear the gallerist has taken the bait because – evidently in response to a request for more – Byrne writes that he has visited his father and has around 50 paintings in his “little house in Dunoon”. . Byrne of course then provided the photos, signing them Patrick. When the deception was revealed, luckily the gallery took the hoax in good part. It could have been otherwise, but the show sold well. Patrick’s photos are very good and some also large. The American Boy, for example, measures two by two and a half meters. You wonder how this could have fit into “Dunoon’s Little House”.

Of course, Byrne is not just a painter. His protean career extends to theater and television with successes such as The Slab Boys and Tutti Frutti. Their wit and verve had a huge impact on Scottish drama, but they also had wider relevance. There are several documentary films playing from the Glasgow show and in one of them he himself remarks on how he has ‘looted his own life story’ for his playwriting. His dramatic work was revolutionary because it was retrospective, rooted in the life and language of his own milieu. For this reason too, there is no real boundary between the visual and the literary. They are drawn from the same source of inspiration. There are beautifully drawn storyboards for the Slab Boys, 20 scenes per sheet, on display in Glasgow alongside paintings of Tutti Frutti’s characters, and an image of a skeletal military figure, in the style of Georg Grosz, is related to the writing of Writer’s Cramp. All these images coexist comfortably with constants of his work such as the stuffed boys and the musicians of his youth and their distant dreams of America. The part of Paisley where he was brought up is described as having been one of the most deprived places in Europe. The flashy music and clothing were a strong protest against this grim environment in the already very dull fifties. What a surprisingly fertile talent flourished on this dark soil – and, as his art clearly shows, it is still firmly rooted there.

John Patrick Byrne: A Great Adventure through September 18; John Byrne, This is not a Retrospective until July 16

Man on the Beach with Cat – part of John Byrne, This is not a retrospective
Self Portrait 2021 by John Byrne, at the Fine Art Society