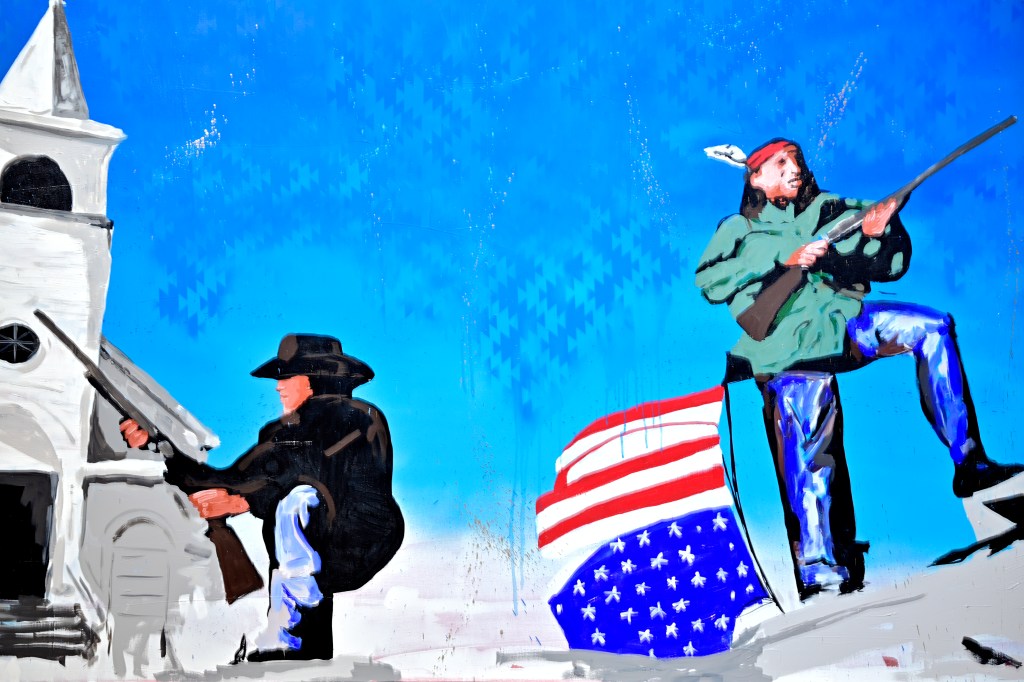 The “End of Silence” exhibition is based on a simple but radical premise: that the ethics of punk rock musicians who began to infiltrate popular music in the 1970s are similar to the ethics of Native Americans today. who strive to claim their place in contemporary society. .

Gregg Deal – a “multidisciplinary artist, activist and disruptor”, according to the show’s text – takes this claim to the max, using lyrics from iconic punk-era bands like the Sex Pistols, The Clash, Black Flag and The Specials to inspire a long series of acrylic and ink paintings that address crucial aspects of the evolution of Native American identity.

The pieces, currently at the RedLine Contemporary Art Center, are loud in every way. Deal incorporates text into his paintings to directly quote direct lyrics about inequity and invisibility, and renders his Hollywood-style images of Indians and frontier soldiers in bright, saturated colors. Many of the works resemble the cutout images of classic comic books with dialogue spelled out in speech bubbles that form dots at the bottom indicating which character in the scene is speaking it.

Deal, a member of the Pyramid Lake Paiute tribe, based in what is now Nevada, connects the dots – with great irony and almost no subtlety – between angry rock ‘n’ rollers of the recent past and Native Americans. currents that “push against power structures that restrain, oppress or suppress; question and challenge authority.

You could argue against the show’s premise, and fairly. There are many faults to be found in assimilating the struggles of people grappling with a barbaric legacy of displacement and near-annihilation, followed by generations of discrimination, exploitation (both financial and cultural) and double crossover with pop star angst, no matter how authentic their music was at the time.

The sincerity and credibility of the punk rock movement have been debated ever since its heyday. Yes, there was genuine anger and frustration, and it was vividly rendered and rightfully inspiring to a generation of young misfits. Punk was real.

But it was also business, done with mainstream record labels, concert organizers, fashion designers and MTV-style videographers. Punk was art, not life and death, and it’s troubling, at least to me, to associate its bullocks with Margaret Thatcher’s government with the threat of attempted genocide that defines, to a degree very significant, the history of North American Natives.

But Deal and its curator, Louise Martorano, present a thoughtful and resonant argument for their case, effectively using the many lyrics that run through the works. And it can be strange.

Consider the overlap of the lyrics of the group Stiff Little Fingers, stated in the Deal chart “Suspect Device”, with the anthemic pleas of today’s Native American activists:

Deal makes the most of shared sentiment. He places the words in a conversation bubble coming from the kind of brave Indian you might see in an old western movie, a strong, stereotypical, fictional “noble savage” suffering indignities with dignity, as if enough of a stiff upper lip bear the trauma. In this way, he addresses not only displacement but also centuries of mistreatment by everyone from government bureaucrats to artists.

Here’s another, perhaps more poetic, example where punk lyrics (as presented through Deal’s artistic framework) seem to echo sentiments that might be expressed by Native Americans now. This is from the “Got Each Other” chart, which borrows from current ska band The Interrupters:

“Let us establish our home in the sacred ground
We’ve been here for years
Solid in the foundation
Blood, sweat and tears
Raise your voice, stand side by side
And we’ll sing forever
We don’t have much
But we understood each other!”

It’s not just the redirected semantics that make the works powerful – which they are, especially when they grow to almost monumental proportions. Some canvases stretch 6 or 8 feet in height, and a mural, applied directly to the back wall of the gallery, is probably twice that size. Deal also allows them to become violent.

His scenes are full of brutality: knife fights and choking, battle scenes with bows and arrows and guns. It’s gritty stuff done by men – all men – with angry faces looking at each other.

He heightens the tension by painting abstract angst in the backgrounds of his scenes. There are dark spots and chips of paint running down like blood. He incorporates traditional Indian symbols – zigzag patterns and crosses – both in his paintings and on the walls around them, but leaves them hazy and incomplete. The works, and the way they are arranged, can be unsettling.

That said, they aren’t obnoxious, thanks to the comic book motif. Cartoon violence just doesn’t seem obscene, even when documenting actual violence. Even some of the particularly fierce song lyrics feel innocuous when presented via this colorful format with a long tradition of children’s entertainment.

There are contradictions in “End of Silence”. In some ways, the work has an aura of being raw punk-rock; Deal is anything but a commercial performer and he makes few compromises. Its ugly webs allow the lyrics to come as their authors intended, as “a fearless, uncensored affront to the systems that do not represent them and were built without them”, as Martorano puts it in his curator’s statement. .

But there’s also something a little too neat and clean about the entire exhibit. Despite the content, it is orderly and elegant, and hyper-contained in RedLine’s gallery of white cubes with avant-garde, polished floor architecture. It’s not messy like the music he wants us to connect with, not dangerous enough to reflect a genre defined by gigs where musicians were known to smash equipment and spit on their own audiences.

Even with that review, however, it’s easy to call “End of Silence” one of the best and most ambitious exhibitions this year in the region. It has a lot to say, as much about painting and pop culture as it does about the politics of convenience, human abuse and oppression – and in that way, it lives up to its title. He makes the connection he wants to make, across eras, across art forms, at a very high volume.

Subscribe to our weekly newsletter, In The Know, to receive entertainment news straight to your inbox.