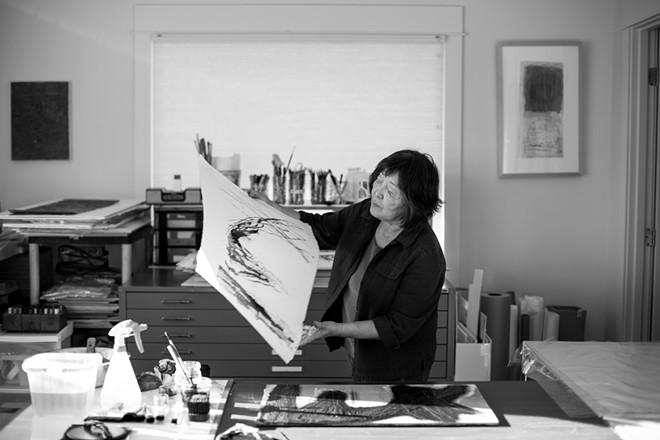 Keiko Hara examines a print in her art studio.

Oborn by artist Keiko Hara happy places is his Walla Walla art studio. This is where she does her painting and printmaking which reflects a “strong love of place”, otherwise known as topophilia. The concept is familiar to fans of Spokane artist Ben Joyce’s map paintings, but also Georgia O’Keefe’s New Mexico abstractions and Claude Monet’s painted haystacks of turn-of-the-century France.

However, topophilia is not just a landscape. As Hara’s current exhibition at Washington State University’s Jordan Schnitzer Museum of Art shows, through March 2023, a sense of place can include brainscapes, including memories.

For example, the oldest piece in the exhibition is a mixed media painting entitled “Image – Space” from 1977-78. Using an opaque watercolor called gouache and assorted drawing mediums, “Image – Space” reflects the spontaneous creation of marks – a kind of scribbling – that Hara produced when she was growing up in Japan.

“[Keiko] believes that we all universally hold special places of personal significance close to our hearts,” says Ryan Hardesty, the museum’s executive director and curator of exhibitions and collections. “These links to ‘place’ can center us in the present or drag us painfully out of the past.”

Another piece, “Verse from Sea”, references Hara’s youthful discoveries during frequent explorations of the nearby ocean.

In the book produced by WSU to accompany the exhibition, Keiko Hara: four decades of painting and printscontributing essayist Linda Tesner explains the article.

“Verse from Sea” is “a lyrical and visual poem in prose”, writes Tesner, “condensing countless impressions and sensations of being at the beach – the falling of rocks in the waves, the water on the water of ‘a downpour on the sea, the patterns that humans and animals make on the wet sand.’

“The poet in [Keiko] does not hesitate to remind us that conceptions of place exist in our minds as fleeting, moving and changing sets of memories, malleable to new sensory experiences,” Hardesty adds. “At the heart of his business is an exploration of the environment and human consciousness, a foundational recipe for a sense of self.”

“Verse from Sea” consists of 12 images, which Hara created using mokuhangaa Japanese woodblock printing technique dating back to the early 1600s and made world famous in works such as Katsushika Hokusai’s 1831 “The Great Wave off Kanagawa” (sometimes referred to as “Hokusai’s Wave”).

J translate a table in a print, but also the engraving itself has historically appealed to artists and collectors. A single work of art can be reproduced in multiples, for example, increasing image access and potential sales.

But for Hara, who began and ended her career in education, first as an art therapist with children with disabilities and then as an art teacher at Whitman College, her priority is the work itself.

“I’m not interested in repeating the works to be a so-called successful artist,” says Hara, who nevertheless succeeded. Her works are in permanent collections such as the Art Institute of Chicago, the Tacoma Art Museum, and the National Gallery of Art in Washington, DC, and she is a sought-after mokuhanga expert.

Like many Japanese children, Hara was exposed to printmaking at school. After high school, she attended art schools in Tokyo and then Oita on the island of Kyushu, paying off her college loans by working at a school for disabled children.

She remembers several students in particular, like the non-verbal, non-moving young boy who literally opened up when he started drawing. Another student drew a tulip from a real flower, including the stem. Hara asked what the rod meant, recalling the child’s response, “It’s pain.” This and other memories stayed with Hara, who considered becoming an art therapist.

Realizing that she would have to leave Japan to continue her studies and pay off her debt for college art supplies, Hara found the courage to sell paintings she had made of the nearby Sakurajima volcano. Hara approached several places, including a department store that had an art gallery inside. No one was interested in his work.

Another artist Hara asked for advice suggested he paint the volcano “like a postcard”.

“I really had to think about what kind of artist I wanted to be,” Hara says of this time in his young adult life. She decided she wanted to chart her own path.

She meets an art critic attracted by her contemporary style and her story. He wrote a big article and, perhaps coincidentally, the department store called her to show him his work when another artist couldn’t fill a spot.

“I was so lucky,” Hara said, laughing now at the memory. She was so inexperienced, she says, that she had to ask people at the art store to help her evaluate her work. Hara not only sold enough to pay her art supply debts, but she had enough to travel to America.

“I’m a big dreamer and challenge myself,” she says.

And at 80, Hara is still going strongproducing both high volumes of work and very large jobs.

One of these pieces is “Space – Kirameku”, a diptych with two rectangular canvases of 7 feet by 9 feet. Sitting in front of its 18-foot overall length envelops your vision. The darker of the two panels is a galaxy-like field of soothing deep blue values ​​punctuated by countless white dots that could be stars – kirameku loosely translates to glow – or could symbolize anything that repeats itself endlessly. The white-on-white panel, on the other hand, conveys subtle variations of white and an underlying pattern of vertical lines reminiscent of a snowy forest.

As you get closer to “Space – Kirameku”, you lose yourself in the texture and color variations, while you further recede your relationship with the painting as your eye is naturally drawn to the darker panel.

As she does with her other works, Hara skillfully uses the language of art – color, scale, shape, pattern – to create a sense of place that can be familiar at one time and, when viewed differently, offers an entirely new journey for the viewer. . ♦