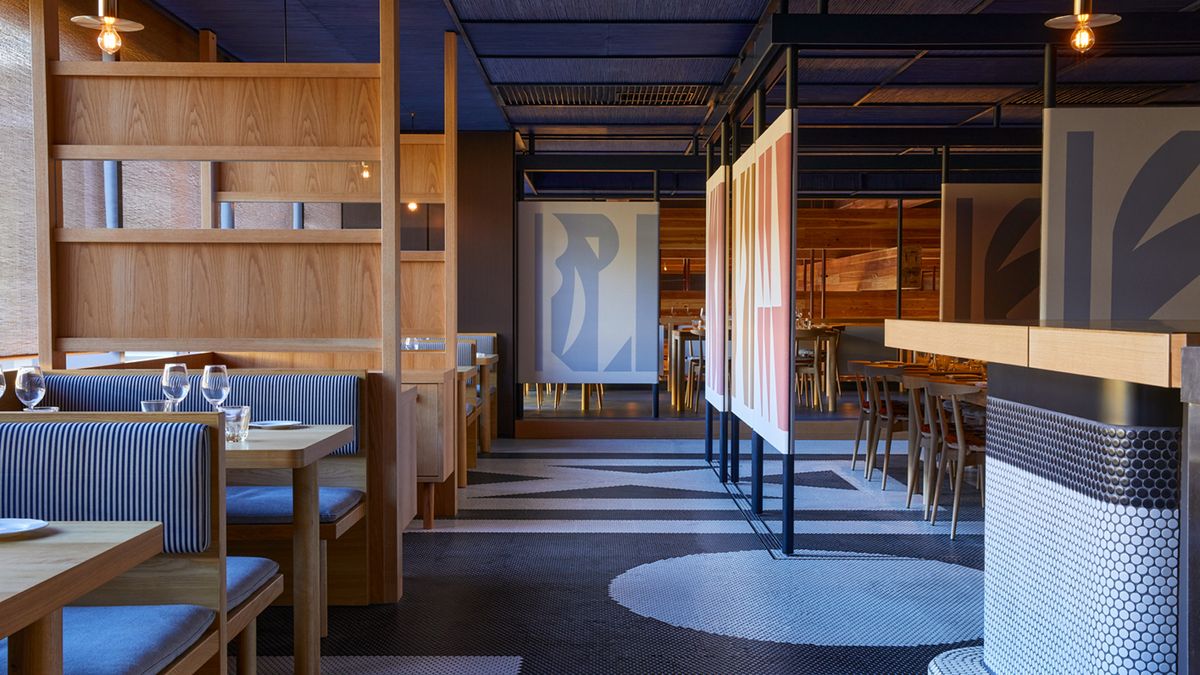 Get our daily roundup of inspiration, escape and design stories from around the world straight to your inbox

Thank you for subscribing to . You will receive a verification email shortly.

There was a problem. Please refresh the page and try again.

Proving that life works in mysterious ways, a new exhibition of works at Ace Hotel Kyoto features an unexpected dialogue between century-old Japanese artist Samiro Yunoki and American artist Kori Girard, grandson of textile designer/artist Alexander Girard. Yunoki and the young Girard first crossed paths when both were commissioned by the Los Angeles-based company Commune Design (which oversaw the hotel’s interior design) to create artwork for the hotel; Yunoki designed the font and logo for the hotel and created all of the artwork in the hotel rooms, while Girard designed the tiling for the hotel restaurant, Mr Maurice’s Italian, as well than screen-printed panels in space.

“It was while working with Commune Design on the design of the hotel restaurant that I was more formally introduced to Yunoki-san’s work,” recalls Girard. “The more I saw, the more I felt an undeniable connection.”

Girard requested a meeting with Yunoki through a mutual friend and “during our visit, [Yunoki] shared many stories, including one about a trip to the Girard Wing of the New Mexico Museum of International Folk Art,” continues Girard. “He explained that he was very influenced by this exhibition and that after seeing it, he felt a greater sense of possibility in his own work. I was very excited to make this connection because the Girard wing of MOIFA has also had a huge and lifelong influence on my work.

On the initiative of Roman Alonso, co-founder of Commune Design, an exhibition for two of Yunoki and Girard was proposed for the inaugural exhibition at the Ace Kyoto gallery.

“Yunoki-san accepted the idea and quickly said that he would have his works made for the show as soon as possible and that he would work in collage,” says Girard. “Inspired by his energy and fervor, I decided to create a similar work in the same medium. The relationship of the pieces is found in a reverence for the concepts of “game” and “color”.

Comprised of six works by each artist, “East Meets West” is a celebration of color, geometry and form. It also coincides with Yunoki’s 100th anniversary and poetically underlines the longevity an artist’s creative legacy can have.

“It was clear to me that the opportunity to do a show in collaboration with Yunoki-san would open up my practice to explore a more spontaneous and abstract approach,” Girard concludes. “I also believe that collaborating remotely for this show worked so well, only because the spirit of our interaction was rooted in an undying curiosity and dedication to a creative life. I am honored and thrilled to share what came of this once in a lifetime opportunity. ‘