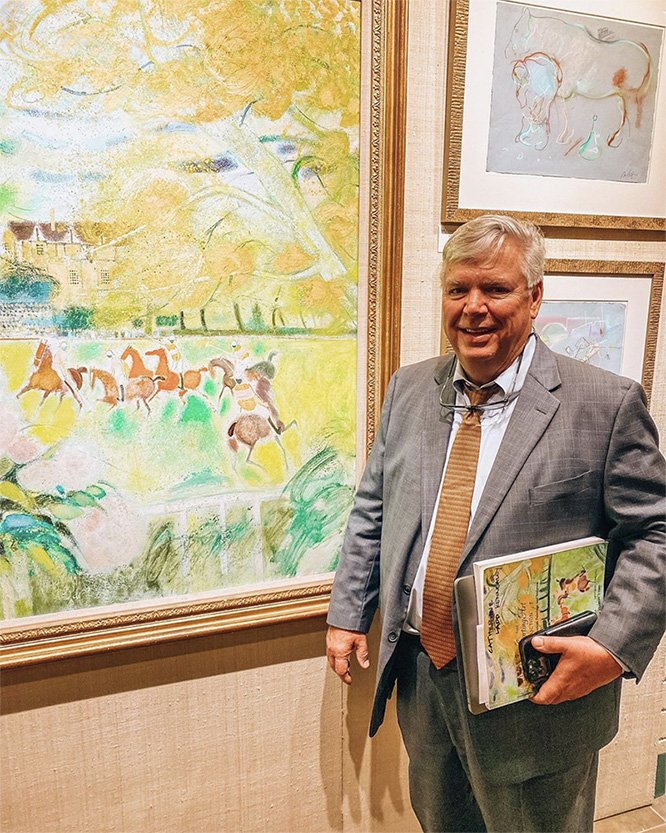 Greg Ladd founded the Cross Gate Gallery in 1975. He began by specializing in horse-themed paintings and sculptures, and the collection has since expanded to include other sports-themed artwork and nature. During his travels, Ladd befriended and represented many contemporary artists from England, Ireland and throughout Europe, as well as artists in the United States.

The Cross Gate Gallery has been located in a stately home on East Main Street for decades, and the Ladd family lived in part of the house. Ladd’s four children grew up with the gallery and helped out when needed. Two of the younger Ladds now work full-time for Cross Gate. Catherine Ladd Kenneally handles communications and administration. Field Ladd works in acquisitions and research. Later this month, the gallery will move to a new downtown location. Business Lexington spoke with Ladd about the gallery and his work with the equine art world.

What led you to create Cross Gate Gallery?

I worked at an upscale antique store in high school called The Villager Gift Shop. There were good quality paintings and sculptures. Then, from my parents’ house, I started framing, and I sold Paul Sawyer prints. At the time, Sawyer’s prints were selling for $20 and I could buy them for $10.

I got married in 1974, and thanks to my friends, my wife’s friends, and friends of friends, I had enough of a clientele to move into a gallery at 215 East High St. My wife and I knew I wanted specialize in sports art, mainly British sports art, as there are many good British equine sports painters. So we pulled out a map of London and found a name that sounded good: Cross Gate. It was a small gallery – probably 20 feet by 20 feet. We moved to a bigger space across the street and in 1998 we bought this building [509 East Main], which gave us a lot more gallery space. My wife is an interior designer. She had a few walls knocked down and did a nice restoration.

And now Cross Gate Gallery is moving to a new location?

We’re moving just around the corner from Old Vine Street. It was Phil Dunn’s Cook Shop. It is a very large open room. We’re going to set up some walls and figure out how we want to set it up. I’m sure we’ll have a lot more of our inventory on the walls. Where we are now, as nice as it is, about 40% of our inventory is stored in the basement, even after installing sliding shelves for artwork on the upper floor.

What was your approach to starting your business?

I really had no one to teach me the trade. I had a good eye early on for quality artwork, but didn’t have much money to speak of. I started small and grew the business.

The gallery opened in 1975 and I first went to England in 1978. One of the artists I mainly went to see was Peter Curling, who lived in Ireland. He is a good painter and he is recognized as the best Irish sports painter. I also went to Paris, where I had a contact.

In Paris I bought a large painting from my contact. Then I bought 10 commercial art posters at a Parisian flea market. There I was, lugging the painting, posters, suitcase and briefcase, traveling by train and boat back to England. A shipper packed everything into a single crate – paintings by Peter Curling, old prints, possibly paintings from auctions and coins from Paris – and sent it back here.

On another first trip, I went to a Society of Equestrian Artists show in England. Through this I met and became friends with Thomas Coates, a wonderful painter. It was linked to the Federation of British Artists, which had the Royal Watercolor Society, the Pastel Society and the Royal Society of Portrait Painters under its aegis. All of these different societies are organized to find and publicize good artists, and seeing their exhibits, I have been able to see the best works of art coming out. In the early 90s we had a good stable of sports painters and sculptors that we liked.

Working with a contemporary artist is a relationship that is built. It works great as long as they produce good paints and I introduce them to people who buy them. That’s the whole game.

I have to go on the road because I have to show the work to a lot of people to create demand. If you have a gallery and you wait for people to come see you, you are going to be dying on the vine, especially specializing in equine art.

The 10th Annual Sports Arts Auction is approaching. How did this develop?

We had done a sports art auction, mostly equestrian art, for Fasig-Tipton at the Saratoga Racetrack in New York in the late 90s. At the time, I was on the road six months a year to make an inventory of art. My wife and I had four children and two dogs. We made money and got in front of people with these auctions, but it was too much down the road after a while. I have continued with the exhibition space in Saratoga ever since.

Keeneland is an ideal venue for the Sports Arts Auction because of the Keeneland Sales. Everyone comes to Kentucky because the best horses are in Keeneland. The first two years were difficult because I was calling on former clients [artists] and asking them to sell with us through the auction, and all they did was weed out and not give us their best products. It got easier because people heard about it and, with 10 years now, we’re the only game in town. Sotheby’s and Christie’s used to do specialist sports art sales, but these have since ceased.

Every year we hope to have a highlight. This year we have four paintings by Sir Alfred Munnings. He is considered the best sports artist of this century. One of the paintings is a race photo, and there are not many race photos on the market. It’s a big one – a 35 by 50 inch canvas. Nothing like this has been seen at any other auction house in the last 20 years.