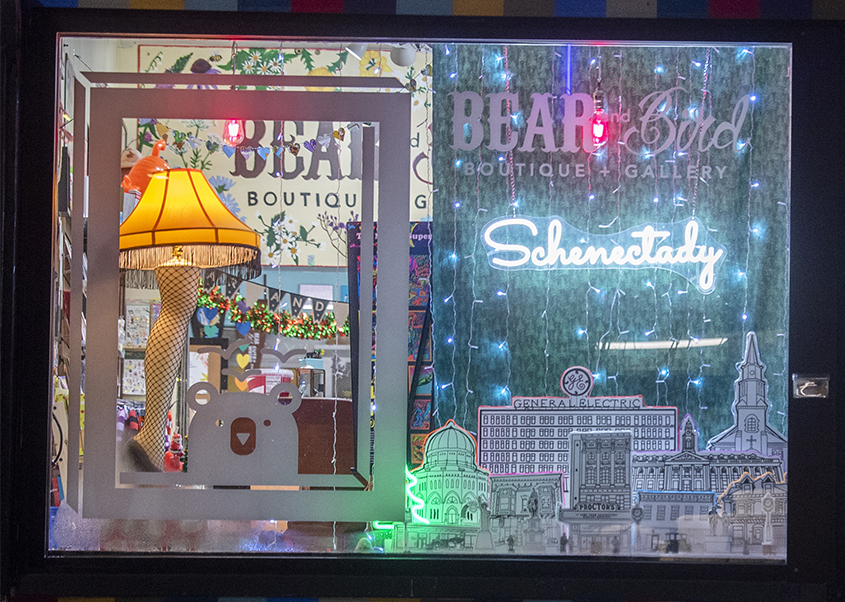 Local businesses and nonprofits have teamed up to create elaborate holiday showcases and showcases in hopes of winning cash prizes in one of six categories, with the money going to the organization at non-profit.

The Bear and Bird Boutique + Gallery on State Street features an intricate exhibit honoring iconic buildings and businesses in Schenectady, including General Electric and Proctors, among others.

â€œThe architecture is iconic, it’s not really like any other place I’ve been,â€ said Amanda Magnetta-Ottati, owner of Bear and Bird. “I think when you’re here you get used to it.”

To make the exhibit happen, Magnetta-Ottati got together with members of her family and partnered with CREATE Community Studios, a non-profit organization that provides community art creation services.

They photographed iconic buildings in the city and used Procreate software to trace the architectural details of each one, ultimately printing them out and framing each cutout with a line of light.

Prominent in the exhibit, they also included cut-out illustrations of statues and miniature prints from The Daily Gazette, which are printed on newsprint. Above the miniature city, an illuminated sign reads “Schenectady”.

Magnetta-Ottati filmed a video that captured the process of creating the display and recently shared it on social media.

â€œIt’s quite rare as a family to do a project like this where you all have the same vision of how it’s going to be completed and it was very satisfying just to see it finally come to fruition,â€ said Magnetta-Ottati. â€œWe are very proud of it.

Later, Caroline Bardwell, owner of The Schenectady Trading Company, partnered with the Schenectady Greenmarket to decorate its storefront. Fairy lights are wrapped around each of the columns at the front and the words “Electric City” are depicted with lights strung on the balustrades.

The biggest challenge in setting it up was the lack of time, Bardwell said. The competition was announced by the town of Schenectady in early November and the screens were all scheduled to be installed by the Holiday Parade on November 20. By the time Bardwell partnered with Greenmarket, they had about a week to execute their design ideas. Yet they succeeded.

“[Iâ€™m] happy to be a part of it and happy to continue to promote Schenectady through my company. It’s just another way to get more. . . community pride and interest in downtown Schenectady, â€said Bardwell.

With their display, they hope to secure a victory in the â€œSchenectady Prideâ€ category.

Nearby, the Habitat ReStore Schenectady team is aiming for victory in the â€œLes Griswoldsâ€ category. Its display case is full of all kinds of details from the movie “National Lampoon’s Christmas Vacation,” including the Griswold family portrait, a squirrel, and Cousin Eddie’s bathrobe and hat.

â€œFamilies have come and they are getting their official Christmas card photo in our window,â€ said Madelyn Thorne, executive director of Habitat for Humanity in Schenectady County Inc.

The design of the display is entirely down to the other Habitat staff, according to Thorne. They’ve installed everything from the sofa to the fireplace, the tree, Christmas lights and more. Most were from ReStore, although staff members also purchased a few key pieces, like the family portrait.

â€œIf you know the movie and you come in here and look around, they have all the details,â€ Thorne said.

â€œI didn’t understand how popular this movie is and why it is a Christmas thing for the people who make sure to see this movie every year. I’m just happy that Habitat and the Habitat ReStore were able to bring so many smiles and laughter to people.

The other categories include the most creative, the technical challenges, and the liveliest. There is also a People’s Choice award, which visitors can vote on through dailygazette.com/illuminocity until January 1. According to organizers, thousands of dollars in prizes will be awarded, with funds going to local nonprofits. Winners will be announced in January

â€œIt was hard being downtown. It was difficult last year and to have this initiative which gave everyone a chance to work together, to reach out and when you come downtown in the evening everything is lit upâ€¦ it is just a bright spot for us, â€Thorne said.

As part of the contest, for those who come downtown to see all of Illuminocity’s entries, six selfie stations are also set up. Participants can visit all six locations, post their photos on social media with #illuminocity and email the selfies to [emailÂ protected] for a chance to win a $ 100 gift card. Entries must be received by 11:29 PM on January 1.

More from The Daily Gazette: