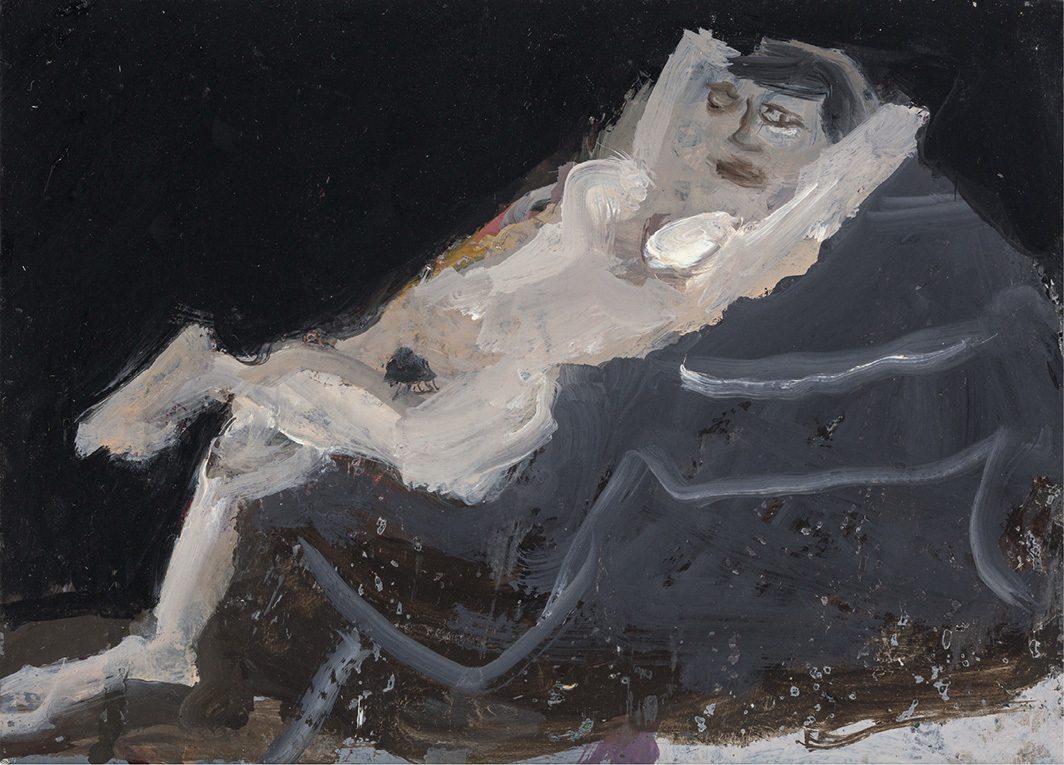 The world depicted by painter Janice Nowinski in her exhibition at the Thomas Erben Gallery was alluring, and not just because of its plump, often nude figures – depicted as solitary figures or arranged in bushy groups – which were gleaned from the personal photographs of the artist, evoking the works of Pierre Bonnard, Paul CÃ©zanne, Jean-Auguste-Dominique Ingres, to name but a few. Despite all their erudition, the twenty-two small-scale oils featured disowned formal refinement in favor of gestural awkwardness and an exuberant sense of ambiguity. The gallery walls have been partially painted a cool, rosy white to complement the near whiteness of Nowinski’s palette. The images exhibited created enigmas of light and depth; their fixations were infectious, intriguing and complex. Take the instrument holder of Nude at the piano, 2021, which looks like a leaden uproar of a gray battleship with a few rows of white trailing through it. A woman is slumped over this muddy mass; on one side of his torso is an inexplicable little touch of mustard yellow with a hot pink glow, the hues fading while highlighting the black background of the painting.

Throughout Nowinski’s works are examples of what can be interpreted as unifying breaks: for example, the figures of Two women on a sofa, 2021, are united by a globby patch of varying roses that brings the eye from the knees of one figure to the inside of the thigh and belly of the other. Whether it is to conjure up a blanket, a pillow or a strip of light does not matter: as an element of the composition it is indispensable. This pink intruder gives the scene a sexy domestic allure, and without her, the women would float in murky platitude. Although Nowinski’s images are drawn from the history of painting and portrait photography, they are nourished by a sensitivity that seems to oscillate between knowledge and total surrender.

The cartoonish facial features of Nowinski’s subjects are crudely drawn when they are there, as if a serious vandal has gotten into it. Sometimes this translates to pathos, as in Nude with a green cushion, 2021, in which the expression on a woman’s face can be read as impenetrable (or not) torment. What is particularly narrative and compelling about this piece, however, is the domed green shape that grows in the left side of the figure – a richly layered mass of emerald, moss, and chlorophyll that has been worked into a sort of ancient luminescence.

Rough canvas surfaces and jerky brush strokes frequently impart grace, and the effect is stunning. Two wonderful examples have been Standing nude with long hair, 2021 and Blue nude, 2018, a pair of moody boudoir paintings that are creepy, desperate, and somewhat stealthy. Nude in front of the mirror, 2021, was particularly powerful; in it, a wobbly triangle of bioluminescent blue light in the upper right quadrant hovers like a ghost above a scene of lonely intimacy. The piece is rendered in deep cobalt, purple brown, and hidden grays. Yellow lines vaguely demarcate the mirror frame in which we see two breasts and a faceless mass of a face – an anonymous face that repels desire. Nowinski undoes the lady’s carnal vanity trope at her toilet and portrays an obsession instead. As in all of the artist’s works here, mystery reigns, the complexities are numerous and the delicate delicacies of the painting are manifold.