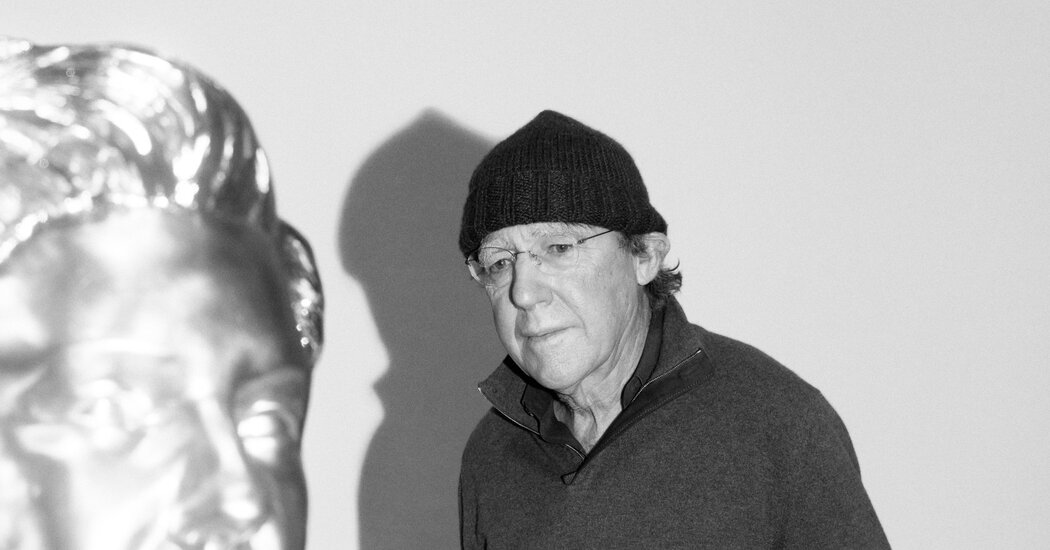 “When you get to the most volatile social topic, I often think it starts out as a provocation or a bad boy experience, which is an incentive for him to start thinking,” says Jack Bankowsky, former editor of Artforum which organized a renowned 2014 exhibition by Ray, Koons and Katharina Fritsch. “That aspect of kicking the hornet’s nest is definitely part of his personality, but it sculpts it, and the complexity that we associate with his work is what comes through on the other side.”

In “Huck and Jim”, both characters’ flesh is transmuted into stainless steel. Jim stands. Huck is bent at the waist, his hand cupped as if reaching into a river. Apparently it was their nudity that scared the Whitney off, but the real precariousness of the sculpture is Jim’s right hand, hovering gently above Huck’s lower back. In between is a whole tangle of desires and pains.

“‘Huck and Jim’ is pretty deep as a monument,” says Walker, who is currently curating an exhibit of disused Confederate monuments for LAXART. “It’s like ur-Americana. They’re not clothed soldiers or men embodying virtue, but they kind of embody a national narrative, a national identity. We have this idea of ​​how a monument works. And then Charles Ray actually gives us something to think about, and it’s like, No no no! Put the clothes back on!”

“There’s a disjunction in there, which I got from Smith and Caro,” Ray says of the non-touching nudes. A similar charged separation recurs in “Sarah Williams,” where the positions are reversed: transvestite Huck stands tall, while Jim crouches behind him, an arrangement of black and white models that seems even more politically charged.

But look closely at Jim’s right hand. Notice the fish hook carved in relief in his half-clasped palm – the fish hook that, in Twain’s novel, Jim uses to fashion Huck’s dress. It is an emotional, historical and racial entanglement in which the parts and the whole cannot be separated. They are nested within each other, like “Sarah Williams” is nested within our space.