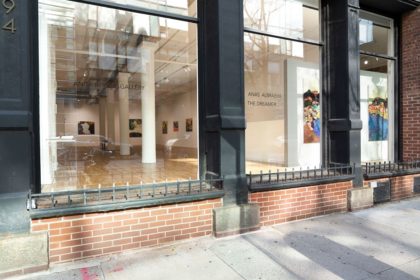 The Anita Rogers Gallery just moved (in February) from Soho to a new space at 494 Greenwich, just north of Canal, so add them here as a newcomer so we can follow the expansion of the gallery district Tribeca.

The gallery opened in 2016 on Mercer Street in a second-floor space, then on the ground floor on Greene Street. And even though they liked this place, there was permanent scaffolding on the storefront and it became too much. “We are thrilled with our new space and location,” said gallery director Elizabeth Thompson. (She thought the space was supposed to be a fitness studio before they moved in; years ago it was the Boris Bidjan Saberi boutique.)

Rogers is the daughter of British artist Jack Martin Rogers and is a classically trained opera singer, harpist and guitarist. as a result, the gallery organizes many musical events and an annual Greek celebration, with live Greek music, food and dancing. (Rogers was raised in Greece.)

The current exhibition – until August 27 – is the work of a young Syrian painter, Anas Albraehe, titled The Dreamer.