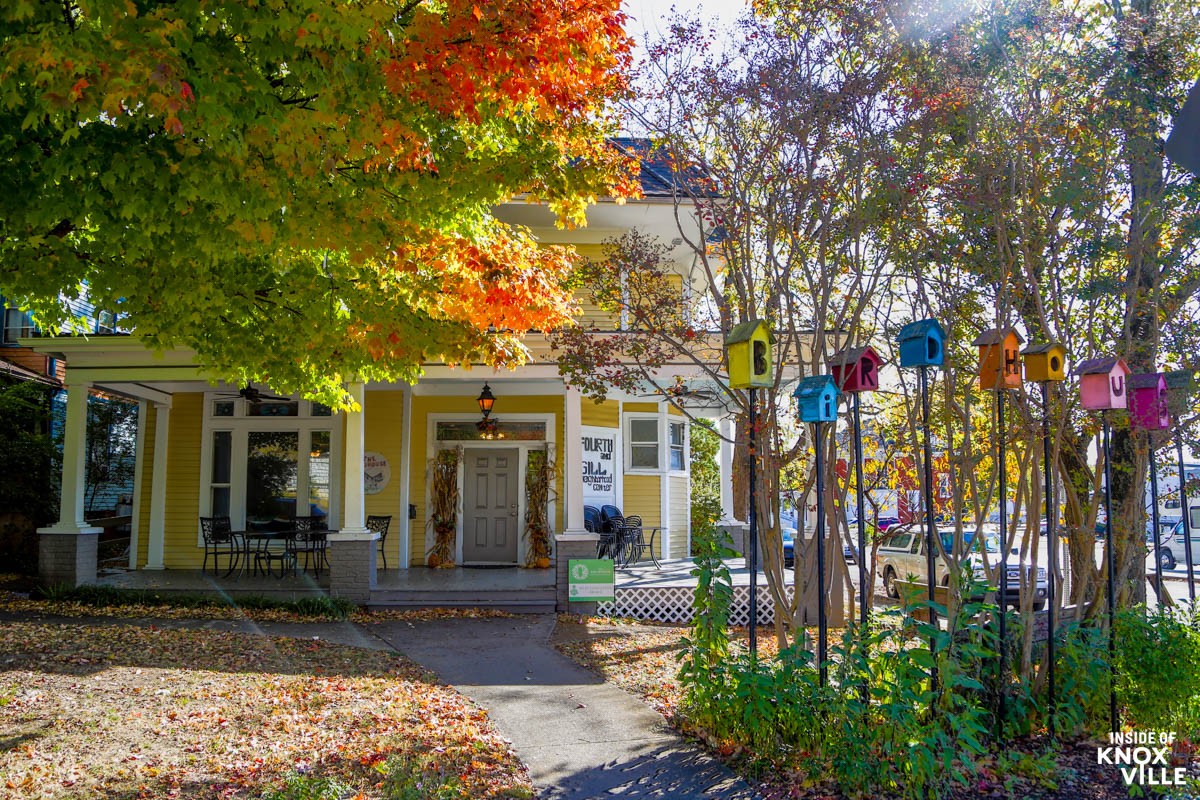 The Fourth and Gill neighborhood has seen several changes over the years. In the late 1800s and early 1900s, this was an upscale neighborhood in North Knoxville. It even incorporated at one point and elected its own mayor. It declined over the decades and then in recent years has seen a resurgence to become one of the city’s most desirable places to live.

One structure, at 800 North Fourth Avenue and recently known as The Birdhouse, has seen most of this history come and go. It has played a pivotal role in history at times and looks set to do so again, both as a center for the community and as a non-profit event space.

Bill said the first resident, Margaret Powers, moved into the house in 1891. Her husband died while the house was being built, suffering a train wreck on the first run of a new train line from Knoxville to Cumberland Gap. His daughter and son-in-law would later live in the house and they owned and operated the Candy Factory (when it was an actual candy factory).

By the 1960s, the building had ceased to be a private residence and belonged to Gene Monday. He was a member of St. James’s Episcopal Church and according to Bill, “There were four churches in this area that wanted to do outreach to poor and low-income neighborhoods in the neighborhood and Gene Monday authorized this group, they are called the North Knoxville Fellowship for Community Service, to run out-of-building youth programs.

He said they ran youth programs from the center, held community meetings and “had our own newspaper, The Gazette. He said they were also focusing on “housing quality and tenant rights issues. We have created coalitions with other popular neighborhoods. . . we started a non-profit organization called the Inner City Neighborhood Coalition and we advocated around issues that affected us all. Much of that was evacuated from here.

Beginning in the late 1970s, the neighborhood received community development funds, “which were federal funds that went through the city”. The result was sidewalks, street lighting, parks and more. He said that more than two and a half million dollars have been invested in this way in the district. In 1982, Bill left this position to work with Legal Aide of East Tennessee.

Professionals began moving in, bringing in new skills and renovating homes. “There was a good mix of new residents and older low-income residents. Over time, more emphasis was placed on historic preservation, and the character of the neighborhood began to change. . . We still create a community and we still have this place.

After the group that ran The Birdhouse for a decade dissipated in the face of the pandemic, the neighborhood considered possibilities for the house in the future, even considering selling it, but ultimately decided to run the funding and many volunteer hours to bring it back and giving it a new direction for the future. Neighborhood residents Thomas and Lindsey Boyd donated $150,000 to help get the project started. Fifty thousand of this sum will be used for ongoing work, while $100,000 has been set aside to begin funding an endowment.

Much work has been done on the old house. Several years ago the porch, which had been removed many years ago, was replaced to match its original 1890s appearance. This work was made possible through a historic preservation grant from the town and neighborhood donations. A series of community workdays took place from July 2021. The workday proved to be a watershed moment in bringing the community together, with over 40 people coming together to help. And it continued.

Contractors were brought in as needed and the building was painted, inside and out. Suspended ceilings were removed, electrical work was done, flashings were replaced, bathrooms were updated, windows were repaired, a new HVAC for the main floor was installed and Moreover. Holes were patched, trim added, ceilings repaired and stained glass windows repaired. The architects have assessed the building with ADA requirements in mind and these are being processed.

Catherine, who was previously the publishing manager for a nonprofit organization in Washington, DC, served as a part-time paid program director for the center for about six weeks. In her previous position, she handled events, finance, marketing, business strategy and more. The building is overseen by a neighborhood association committee, but Catherine is the operational control point.

They hired me to get things off the ground after the pandemic lulls in and after the decision was made to keep the property. She said the intention is to “have it function as an event rental space, which can both be a business but, more importantly, fulfill our mission of perpetuating arts and culture in the community of Knoxville. . . and support the neighborhood. . . It’s a bit like a start-up.

She said the focus will be on three fronts. First of all, the space is currently and will be offered for rent to groups for receptions, parties, meetings, exhibitions, small concerts, etc. Second, the center will host events either for the neighborhood or for the public. Finally, there are four upstairs office spaces that are leased to long-term tenants, including a new law firm, neighborhood band, Mick Harrison and the High Score, and Good Guy Collective.

Bill pointed out that in some ways they build on the good work done by The Birdhouse organization. “It was phenomenal. They had Spanish lessons for children, clothing exchanges, immigrant organizations organized cultural events, concerts, they had a library. In a way, we are starting a non-profit business, but we continue to build on the work they have done. »

For now, social media accounts are under the Birdhouse umbrella, including their Instagram, Facebook and Twitter accounts. Each of these has a link to rent the space, but if you want you can go directly there by going here. A new website should be operational soon. If you would like to email Catherine any questions, you can contact her at [email protected] The group is also open to financial donations to support the ongoing work of the center and these can be handled by email (pending the new webpage, which should have a donate button).