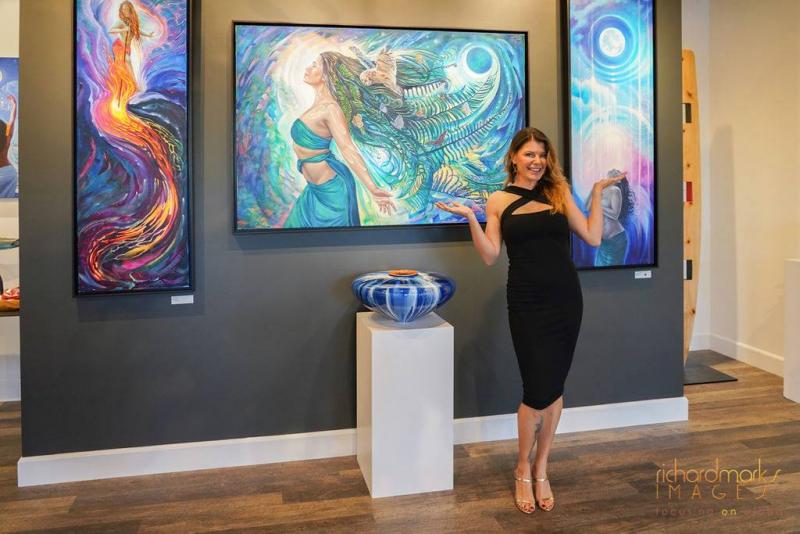 It is the dream of many artists in Maine, not only to find gallery success with their work, but to one day open their own gallery. Christina DeHoff, an artist who grew up in Camden, had two crushes in her career, once in Rockland 20 years ago and more recently in Hawaii after opening her second gallery.

In 2002, as a reporter for Village Soup, I covered DeHoff in a story, in which she became one of Rockland’s youngest gallery owners at 357 Main Street at the age of 25.

DeHoff, who painted from a young age, was just learning to find his place.

â€œIt was the most incredible opportunity and I had never run a business before at 25, obviously,â€ she said. “So I went ahead and tried to figure it all out.”

â€œIn some ways today I feel like it was premature to run a gallery in the Midcoast for 20 years,â€ she said. â€œRockland was still a gritty place then, not this art and food capital that is now,â€ she said. â€œIt was a very different time. About five years later, I remember someone telling me that Winter Street was going to be developed and that we would be in the perfect location and more galleries would be drawn to the area. But, that wasn’t where it is today, and I burned out before I could see this transformation.

DeHoff, in his travels, also saw the potential for collaboration between different galleries.

â€œEveryone was doing their own thing and I suggested that all galleries emulate an ‘Art Night’ walk that other galleries in other cities were doing,â€ she said. “I first argued my case at Farnsworth and we started an art walk on Wednesday night, which then turned into Friday night.”

DeHoff was still trying to find his way in the art world.

â€œI don’t compete – it’s just not in me,â€ she said. â€œI do collaboration. If I had a client in my gallery who wanted another type of art and I knew where he could find it, I would send him to another gallery. I know this is not a “good deal” as long as you don’t make money with this decision, but I come from a place where people are uplifted. “

After 10 years as the head of 357 Main, DeHoff also faced another challenge, an autoimmune disease that would become a major focus in his life, to the point of having to move away from Maine. She and the Mays sold the gallery to Jake Dowling in 2007 and over the next two years DeHoff began traveling to Hawaii and returning to Maine.

â€œI signed up for a dance workshop in Maui and was fully committed to moving there three years later,â€ she said.

â€œWhen I went to see the gallery space for the first time, I looked up at the address, my heart skipped a beat and I almost cried. I felt this space was meant to be the next home for my art. The home in Maine where my mother and I had grown up for about 85 years, my family’s address, affectionately known as “105”. Of all the numbers in the world … 105 is back in my life. “

Having been in Maui for the past 10 years, DeHoff has made a number of friendships and relationships as a full time artist.

â€œMy niche is really specific,â€ she said. â€œI am focusing on the divine feminine and it is not for everyone. Hawaii’s art scene is very different from Rockland’s. It is a very large business world that does not lend itself to slow creation.

â€œMy work is not prolific and does not attract the general public. For example, I was asked to paint art that has more commercial appeal. I paint people well, so I was asked to paint portraits of Jesus. Or turtles and palm trees or above / below the waterline. I could have done it, but I stuck with my own style. Some galleries here have a chain with one in Maui, one in Key West, one in Las Vegas, so the artists are widely represented and have many reproductions.

â€œI’m talking about artists who treat their art first and foremost as a business. They have families to support, so they look for what sells and they are financially successful at that. It’s wonderful, but it’s not the same audience that is drawn to my work. Basically, I’ve been trying to figure out how to fit in here in an art market that was very new to me for 10 years.

Another love affair happened when DeHoff’s owners and friends, two chefs, had additional space on the ground floor of their restaurant and they asked DeHoff to open his own gallery.

The opening of 105 Fine Art took place on December 15.

â€œI have always dreamed of having a gallery here; but never could conceptualize it, given the price of things, â€she said. Given her collaborative nature, DeHoff knew that this couldn’t be a gallery just for herself.

â€œHow do you run a business while trying to find the time to create your own art? ” she said.

105 Fine Art is a small boutique gallery featuring seven artists from various genres, who DeHoff says all have the same independent streak as her.

â€œAfter all this time, what made my works a little weird with little appeal to the masses is now what makes them stand out,â€ she said. I have now found my audience.