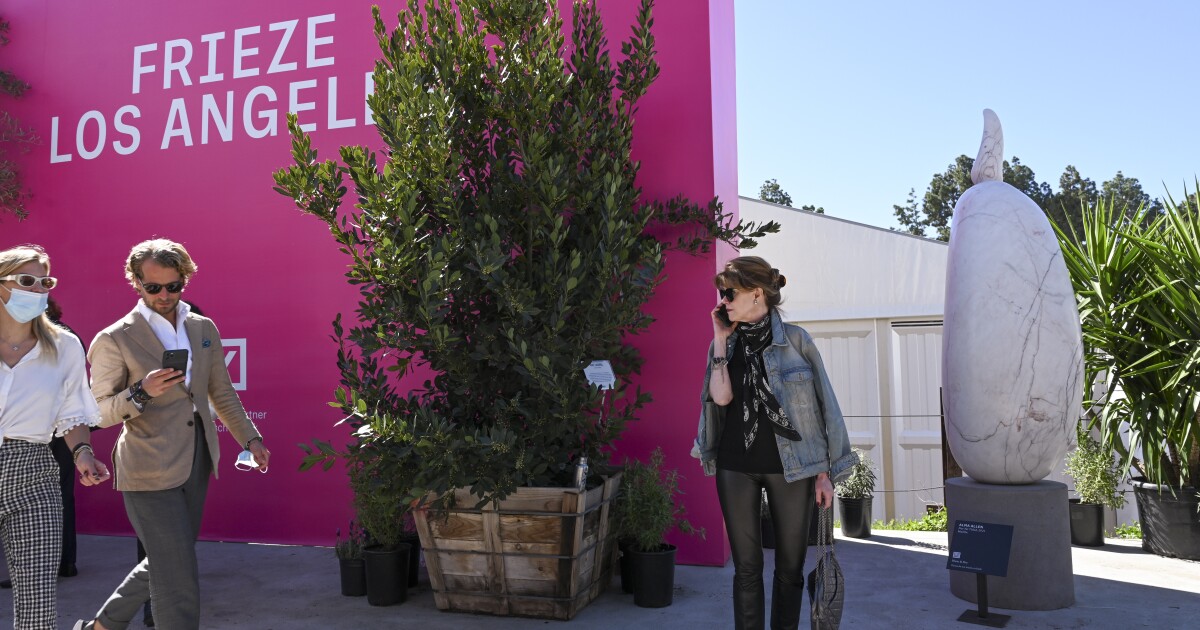 While the auction market has thrived under COVID, the past few years have been tough for art fairs and museums. During the pandemic, earnings at the high end of the market have remained strong. Sotheby’s has achieved consolidated sales of at least $7.3 billion, its highest annual total in its 277-year history. At Christie’s, sales of $7.1 billion pushed their total to its highest level in five years. That’s all well and good for top-notch traders, but what about rambling practitioners and gallerists with prices that are a little more down to earth?

We’re heading to this year’s Frieze Los Angeles for an answer. This year, Frieze Los Angeles returns with a new location in Beverly Hills. The art fair has spread to over 100 galleries and includes the usual suspects like Gagosian, Hauser & Wirth, Sprüth Magers and David Zwirner. It also features local art stars like Betye Saar who presents a new iteration of her monumental 1983 Los Angeles public mural, “LA Energy” for Roberts Projects. Chris Burden’s ‘Dreamer’s Folly’, a large-format architectural sculpture completed in 2010, just five years before the ‘City Lights’ artist died of melanoma, makes its US premiere at the Gagosian booth. Kehinde Wiley has a new portrait on the Roberts Projects stand, and Sterling Ruby works with SprüthMagers, as do Barbara Kruger and the late John Baldessari.

Under the direction of Christine Messineo, the new director of Frieze Los Angeles and New York, the show has expanded to include BIPOC Exchange, a collaboration with Tanya Aguiñiga, artist and founder of Art Made Between Opposite Sides (AMBOS). Located in the Wilshire Garden of the nearby Beverly Hilton Hotel, it features 10 artist-led projects based in Los Angeles aimed at creating a more just community.

But this year, the focus is on local galleries like Blum & Poe, The Box, Château Shatto, Jeffrey Deitch, David Kordansky Gallery, Regen Projects and Various Small Fires (VSF). There’s also Focus LA, a forum for galleries and artists who previously could only dream of a Frieze-level exhibition. This year, 11 exhibitors are added, including Baert Gallery, Garden, Gattopardo, In Lieu, Luis De Jesus Los Angeles, Marta, Stanley’s and Stars exhibiting for the first time, with returning participants such as Bel Ami, Charlie James Gallery and Parker Gallery.

“In addition to really wanting to support BIPOC artists, it’s time to give them a bigger platform, celebrate them, and see them appear in institutions and private collections,” says Focus LA curator Amanda Hunt. , from the Lucas Museum of Narrative Art. “Indigenous, black, brown and also queer storytelling, there are stories here that I want people to learn about.”

If galleries and museums can give a voice to strangers, they cannot force collectors to buy their works. In this, gallery owner Charlie James says the gallery has done quite well. “If there’s one creative space that hasn’t been significantly impacted, it’s the contemporary art gallery space. Our revenue in 2020 was down a bit, but the margins were as we were more profitable. And 21 has been great,” says James. “Over the four, five, six months of 2020, of course, everything slowed down, but it never stopped. But in July 2020 the taps were back on and they stayed open. t do art fairs. It was good when almost everything else was bad.

On the Charlie James Gallery stand is a piece combining the work of two other Los Angeles-based artists, Patrick Martinez and Jay Lynn Gomez. Their collaboration, “Labor of Love,” features a 10-foot wall made by Martinez. Cleaning is a cardboard cut-out version of Gomez’s mother, made by Gomez. Maids and gardeners have been a cornerstone of Gomez’s oeuvre since his breakthrough as Ramiro Gomez with his painting, “No Splash,” based on David Hockney’s 1967 work, “A Bigger Splash.” , but populated by a pool cleaner and a maid. About a dozen of her acrylic paintings on magazines are included here, luxurious images taken from periodicals in which she adds nannies, housekeepers and gardeners.

Similarly, Parker Gallery had its best years in 2020 and 2021. Located in a house in a residential area of ​​Los Feliz, their front yard has become a sculpture garden during the pandemic. They thrived despite not offering virtual exhibitions or appointment-only programming, unlike the Charlie James Gallery and others.

The work dialogues with three paintings by Troy Lamarr Chew II, also from LA. They are part of her ongoing “Out of the Mud” series, which combines traditional African textiles and patterns with contemporary scenes and imagery.

The unexpected rise in business can probably be attributed to two things: the accumulation of disposable income and the hours of boredom spent staring at walls. “You couldn’t do anything in 2020 for fun. Everyone was sitting at home and buying stuff. It definitely favored us,” observes James.

Hunt agrees. “People just look at space more seriously, more intensely. You also see it in the housing market. I think art is something that helps people cope. You can look at it, engage with it, talking about it, thinking about something. It didn’t stop. People really missed going to museums and galleries.”