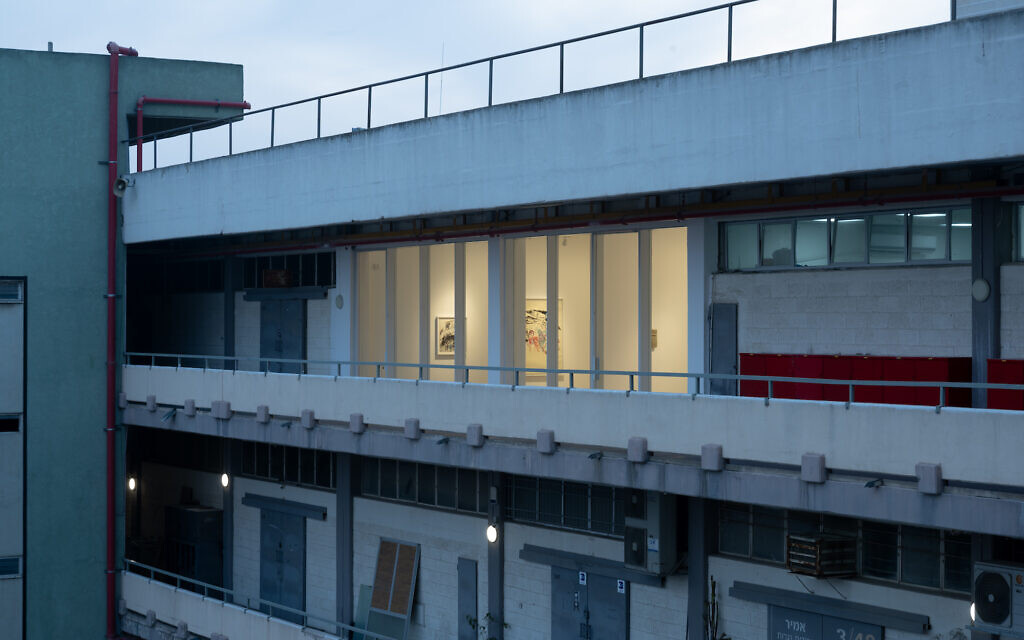 Beit Sapir, a minimalist industrial building in Jerusalem’s Givat Shaul neighborhood, is either the strangest place for a contemporary art gallery or the best possible place for one.

But even if the decision to open a branch of the famous Gordon Gallery of Tel Aviv in one of the less artistic corners of Jerusalem was a gamble, gallery owner Amon Yariv insists that bringing the space to the capital was obvious.

â€œThere are 800,000 people in Jerusalem, I only need around 800 clients,â€ said Yariv, who officially opened the gallery on Wednesday. ” You have the [Israel] museum here, I have one of my major artists here, Pesach Ben Zvi, and he’s having a solo show there next year. â€

The Gordon Gallery, first opened by Yariv’s father, Yeshayahu Yariv, in 1966 on Gordon Street in Tel Aviv, has long been an address for many leading Israeli artists and collectors.

Change has always been part of the business. In the 1970s, the Yarivs established the country’s first auction house, which played a major role in the development of the Israeli art market.

By registering, you accept the conditions

Amon Yariv stopped holding auctions in 2001 and turned the gallery’s attention to representing and promoting contemporary artists and expanding the gallery’s collection.

They added additional gallery space with a move from Gordon Street to Kiryat Hamelacha in Tel Aviv, then a rough industrial estate, and have also added a sculpture garden in recent years.

Adding space to Jerusalem was something Amon Yariv had thought about for years, having become familiar with the city when he first studied at the Bezalel Academy of Arts and Design twenty years ago, where he studied photography and lived near the Mahane Yehuda market.

â€œWe thought it was an interesting experience and a way to expand our program,â€ he said. â€œAll the Jerusalemites told us we were crazy.

However, the choice of Givat Shaul for his gallery is not natural. The neighborhood, far west of the city center, is a maze of offices and light industries, dotted with big box stores, discount warehouses, publishing houses and mechanical shops, and caught up in sandwiched by ultra-Orthodox and modern Orthodox residential neighborhoods.

There are also a few artist studios, as well as the ultra-Orthodox branch in Bezalel, Oman, which is located next to the new gallery.

Neighbors of the new gallery were among the attendees at the 250-square-meter (2,700-square-foot) gallery opening on Wednesday evening, where solo exhibitions by Israeli artists Ofer Lellouche and Aviva Uri were presented.

A room in the large white space was devoted to Uri’s black and white drawings, expressed in thick, faint lines.

The other room was centered on Lellouche’s bronze sculpture, â€œThe Hug,â€ and surrounded by nine small clay reliefs on the walls, depicting different aspects and sides of the sculpting process.

Ofer Lellouche’s bronze sculpture, “The Hug,” stands at the center of one of two solo exhibitions at the Gordon Gallery’s new location in Jerusalem’s Givat Shaul industrial area, which opened on 22 December 2021 (PR authorization)

Yariv said he recently bought Uri’s works from a collector, while Lellouche’s pieces were freshly cast in the artist’s studio.

From the outside, the low-slung Sapir Center is surrounded by three levels of exterior walkways and a jumble of doors, panels, and air-conditioning units leading out to a crowded parking lot.

But inside, the gallery is spacious, light and airy. Gone are the thick cement walls and small windows that characterize most spaces in the building.

Yariv commissioned Salty Architects to lead the renovation, removing the industrial facade and replacing it with large windows, offering glimpses and views of the industrial vibe that still exists just outside.

Visitors are welcome everywhere in the space, including the two front galleries, the inviting library of art books housed on white shelves that extend up to the ceiling, as well as the rear section, where Other works of art are available to browse, in addition to the massive, eye-catching crashed car piece by Ron Arad hanging on the wall behind a desk.

â€œEverything that is here will be different from what it is in Tel Aviv, it is a way to experience and develop,â€ Yariv said. “I’m going to show new artists, maybe artists from Jerusalem, but not as a statement, it’s about showing the best art in Israel that I can show and being able to work with them over time.”

Are you serious. We appreciate this!

We are really glad you read X Times of Israel Articles in the past month.

That’s why we come to work every day – to provide discerning readers like you with must-see coverage of Israel and the Jewish world.

So now we have a request. Unlike other media, we have not set up a paywall. But since the journalism we do is expensive, we invite readers for whom The Times of Israel has become important to help support our work by joining The Times of Israel community.

For as little as $ 6 per month, you can help support our quality journalism while benefiting from The Times of Israel WITHOUT ADVERTISING, as well as access to exclusive content reserved for members of the Times of Israel community.