I saw for the first time a work by Henri Matisse (1869-1954) at the age of seven. It was a tapestry, Polynesia, newly acquired for the collection of the Art Gallery of NSW. I was amazed at the simplicity of the clean, white and marine shapes floating on blue squares.

Matisse: Life & Spirit, the gallery’s summer blockbuster, shows how this rhythmic elegance was achieved. It includes the original model of this tapestry, called Polynesia, the sea, as well as its partner, Polynesia, the sky.

They are hung in the last room of the exhibition, a celebration of the creativity and unfailing eye of an old man ravaged by disease.

His hand that once defined feminine beauty with a single curved line could no longer draw, but, as an accompanying video shows, he remained a master of scissors and used a stick to direct assistants where to place the shapes that ‘he cut out.

Matisse’s Polynesia is the distilled memory of his visit to Tahiti in 1930. Although he did some drawings at the time, he was never the kind of artist to paint a travel diary. On the contrary, years later in war-torn France, he took elements of this place of sun, sea, light and color to make it his own.

Polynesia also gave Matisse the technique of tivaevae – a traditional Polynesian appliquéd fabric – which he adapted into cutouts that Justin Paton, one of the co-curators of the exhibition, called “l ‘one of the great blossoms of modern art’.

The greatest of them is the exquisite melancholy of The Pain of the King: a self-portrait in extreme old age and a contemplation of the music of death. He is so big, so fragile, that he sits enthroned, protected by a glass, watching the last room of this very large exhibition.

He shares this piece with the frenzied music of Jazz, the first substantial series of cutouts by Matisse conceived as an illustrated book. Here, the individual pieces are placed as if they were musical notation, giving them a syncopated rhythm on the wall. This tribute is most evident in the exhibition’s centerpiece, an evocation of Matisse’s last great work, the Chapel of the Rosary in Vence.

Matisse designed the chapel, built between 1947 and 1951, as a tribute to the Dominican nuns who cared for him during his illness, and as an exploration of how spiritual values ​​let in light after the darkness of war.

Although this is a Christian chapel, the shapes evoke both nature and plants from other cultures, so it is more of a universal affirmation of spirituality.

Here, the central gallery courtyard has been altered to match the size and proportions of the chapel. The artist’s designs on the tiles are shown in a video loop, while the walls are adorned with life-size studies for the stained-glass windows.

There are the two collage designs for the chasubles (the outermost liturgical vestments of a priest), while the entrance shows both an evocation of the exterior of the chapel and a wall citing the plain white tiles inside.

Thanks to the generosity of the Center Pompidou to lend numerous works that have never traveled so far, it is possible to see here the full range of Matisse’s art, including sculpture.

It is one thing to read the continued influence of his Return (four bronze sculptures of female backs) on her decorative paintings, but an entirely different experience to see these large bronze reliefs of powerful female bodies. Other, smaller sculptures recall the importance of African art to Matisse as he explored form. It was more than a search for exoticism.

On the contrary, Matisse seems to have been on an endless quest for new ways of seeing and then incorporating what he found into his world.

Matisse surrounds himself with objects and people who become recurring images in his work. This allowed the curators to place the bronze in blocks Reclining nude (1907) adjacent to Still life with ivy (1916), a painting which includes the Reclining nude sculpture.

Other works seem to cite, with variations, some of his colleagues. Like other artists of his generation, he was influenced by Cézanne, famous for his blocky and structured still lifes. Matisse paints Still Life at the Green Buffet, where the structure is flattened while the perfectly placed fruit seems to levitate in the ether.

Matisse’s career is a reminder that not all artists start young. He was studying law when he suffered from appendicitis. While he was recovering, his mother gave him a box of paint and he was won over by the color.

With Matisse, it was always about color. 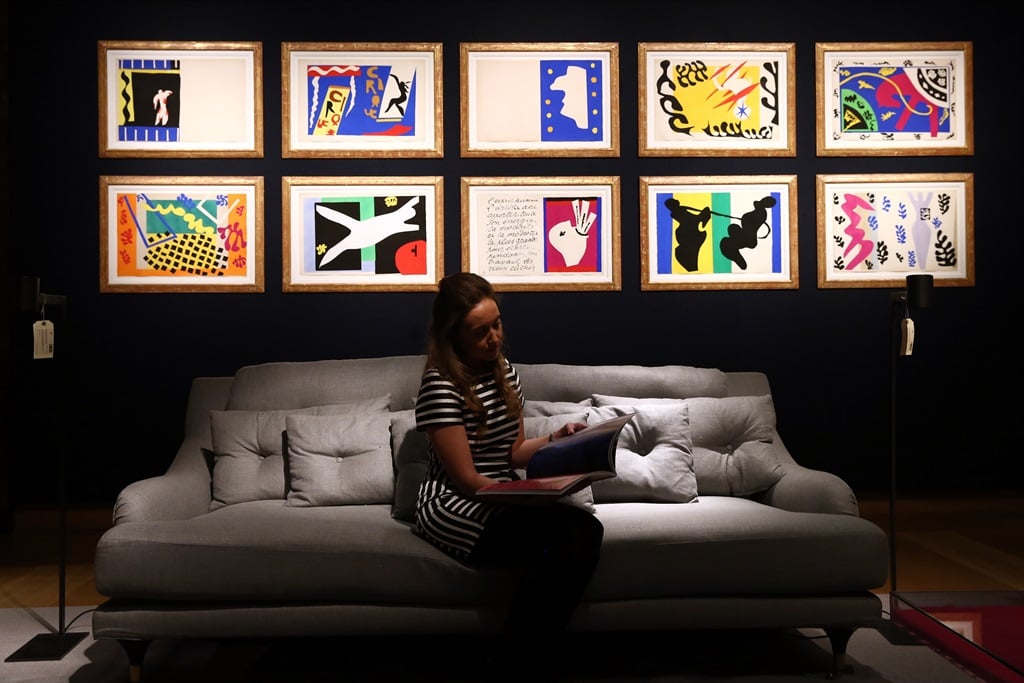 One of the first works in the exhibition is a portrait of the Italian model Bevilaqua. The sheer intensity of the pure cobalt blue of the shadows around her face shows the power of the color that would first attract critical attention to Matisse with the Fauve exhibition in 1905. Then there is the glow of the Red Carpets. , with contrasting patterns of a flamboyant, intense red.

Perhaps it was the impact of dogmatic cubists, or perhaps the trauma of World War I cut the tone for a while – minimalists could learn from the rich blacks of French Window in Collioure. But the color and the sensual line quickly reaffirmed themselves as its dominant mode.

The beauty of this exhibition is the way it unfolds the development of the artist’s life, supported by his exquisite designs, which serve as background music. In addition to art, he’s brought to life by rare stock footage footage – including a delightful streak where he shows he has no power over his dog.

Matisse: Life & Spirit Masterpieces from the Center Pompidou, Paris is at the Art Gallery of NSW until March 13, 2022.