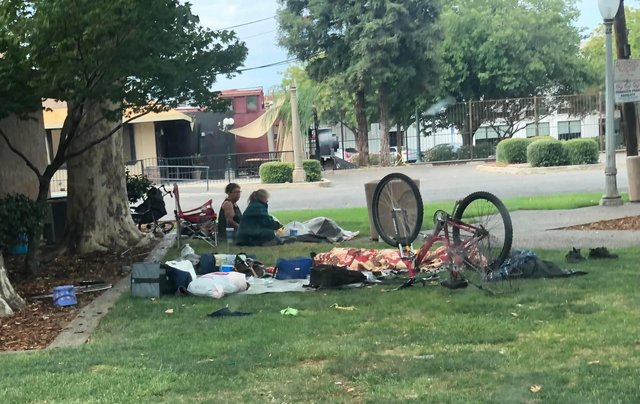 In 2019, Legacy Health Endowment, a local nonprofit health organization, commissioned a 24-page report on the subject of homelessness in the town of Turlock.

Although LHE viewed the topic primarily from a health care perspective, the report concluded that while Turlock may not have a homeless “crisis”… he does have a homelessness problem. .

Three years after the LHE report, the problem persists. Apparently the problem is now concentrated in the town center of Turlock which in turn has created problems for business owners.

Earlier this summer, a group of frustrated business owners collected photographs of homeless people sleeping on downtown sidewalks, in doorways and behind dumpsters.

“Yeah, we were basically trying to shame the town,” said Jennifer Roots Sousa, owner of Rustic Roots on Main Street. “But I feel like a compassionate person. I did my best to help many homeless people I met. But at the end of the day, I’m a business owner. And that has an impact on my business.

Ken Kelleher, like Roots Sousa, also sympathizes with the plight of the homeless. But his establishment, the Finesse Gallery on Center Street, adjoins an alley where the homeless tend to congregate.

Kelleher bought a shovel which he uses exclusively to clean up the excrement in his alley.
“And if I leave the shovel outside, it’s stolen within 10 minutes,” Kelleher said.

According to the Stanislaus County Point-In-Time Count (PIT) — essentially a census of the homeless — conducted in February, the number of homeless people in Turlock has actually declined since 2021.

Roots-Sousa, Kelleher and Jensen are not buying it. And they may be onto something.

Although Turlock’s total homeless count fell 10% this year, the county pointed out that several factors contributed to the lower number of homeless people counted. Among them were:

· Different data collection methods – Due to the pandemic, there was not a full crowd of volunteers fanning out across the county.

· Weather factors – Fewer homeless people were outside and available to be counted, due to temperatures below 35 degrees.

· Fewer volunteers — The traditional end-of-January count was moved to February, which posed challenges for volunteers who had to attend mandatory training sessions. About 300 signed up to volunteer, but fewer than 200 actually participated in the February count.

According to the PIT count, Turlock has 211 homeless people, or about one in every 350 residents. The rate is better than California’s overall rate – 1 in 240 – but much worse than the national average of 1 in 600. The rate of Turlock is also greater than that of Modesto (a city three times the size of Turlock), where 1 in 150 residents are homeless. But Turlock is a far cry from neighbors Keyes, Ceres, Hughson, Oakdale, Patterson, Riverbank and Waterford. With a combined population of just over 140,000, these communities have a homelessness rate of approximately 1 in 1,100 residents.

Before the homeless camp sweep, homeless people tended to congregate in a single, remote area, giving downtown the patina of a neighborhood with little homelessness. After the sweeps, the homeless left their base and spread through the city like windblown dandelion spores. Since then, the homeless population has become more visible and has led to a common refrain: “It’s getting worse.”

“That’s the biggest challenge for us,” said Hedden, who stops by city parks daily on the way to work to interact and make inroads with the homeless population. “And that’s the biggest source of frustration for us.

“But no one’s concerns fall on deaf ears.”

In 2012, the U.S. Department of Housing and Urban Development (HUD) divided homelessness into four distinct categories: living in a place not intended for human habitation, in an emergency shelter, or in transitional housing ; the loss of the principal residence at night; precariously housed families with children; and those fleeing domestic violence.

In other words, homelessness can take a myriad of forms.

Some homeless people have a job, but no place to live. Others may not have a home, but have a car they live in, driving from parking lot to parking lot, hoping to avoid detection. Most, however, have more visible demons, such as addiction or mental health issues. These victims are often seen wandering the streets, muttering to no one in particular.

But whether it’s drugs, alcohol, mental health issues, family discord, financial hardship or just plain bad luck, the fact remains: Turlock, like most other towns in this country, has a problem.

Editor’s note: In the coming weeks, the Turlock Journal will publish more articles examining this issue of homelessness. We’ll have deeper conversations with business owners, law enforcement officials, elected officials, nonprofits, and homeless people themselves. We do not promise any solution, only to shed light on a problem that can only be solved by approaching it from various points of view.