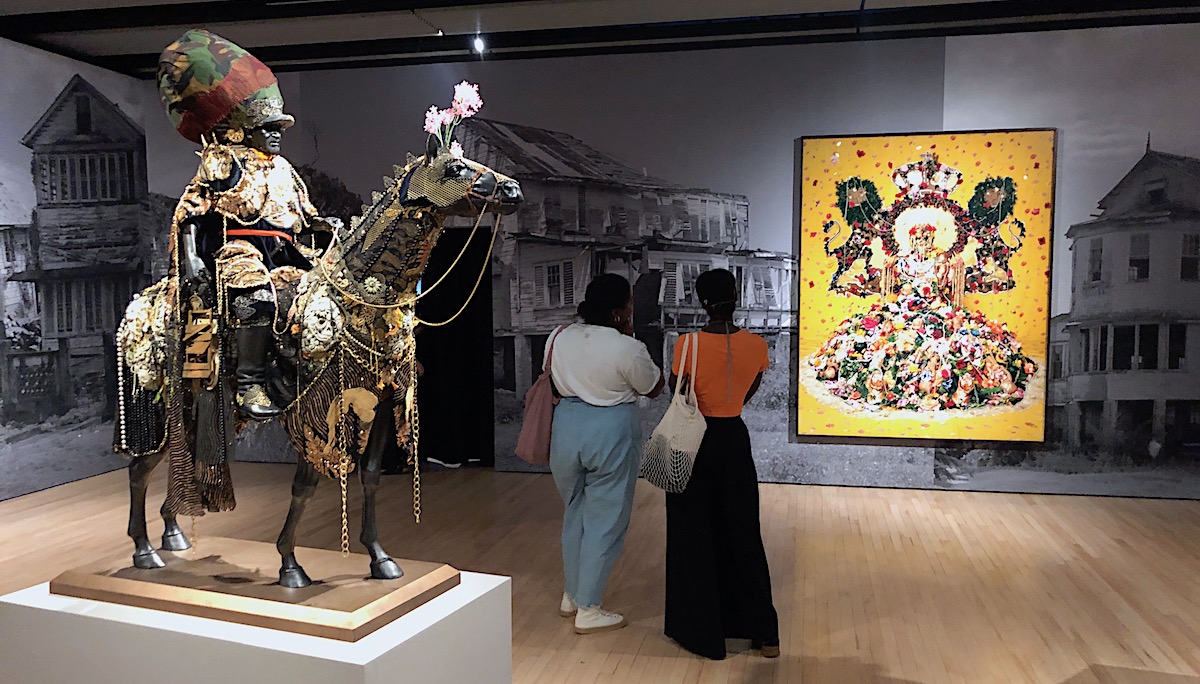 In his 2020 Aperture article on “The Black Fantastic,” Ekow Eshun used a definition of fantasy created by scholar Rosemary Jackson that “has to do with the inversion of the elements of this world, the recombination of its constituent characteristics into new relationships to produce something strange, unfamiliar and seemingly ‘new’, absolutely ‘other’ and different.

With ‘In The Black Fantastic’, Eshun said in a conversation with film critic Chrystel Oloukoï that he “is interested in how artists from different mediums (visual art, film, music) treat the idea of ​​race in general, as a social construct that retains a defining presence in all of our lives, through myth and speculative fiction.He is interested in the “fantasy of race and the lived reality of race” , but also to “question this condition and look beyond” “as a means of describing new encounters, new ways of being and seeing”.

I am interested in collective memories, cultural and spiritual practices – Ekow Eshun

Alongside this facet of Black Fantastic, Eshun is also interested in “collective memories, cultural and spiritual practices that artists and cultural figures draw upon in expansive and generative ways, reaching back in time, as well as into the future, reaching towards the myth. , spiritual belief. It’s about getting out of Western binaries or dichotomies such as “retroverted to the future”, “past and present, natural and supernatural, scientific and spiritual, etc.”

The works it showcases or exhibits – which in 2020 included Ayana V. Jackson, Adama Delphine Fawundu, Lina Iris Viktor, Hew Locke, Isaac Julien and Kiluanji Kia Henda while in 2022, in addition to Viktor and Locke, are Nick Cave, Wangechi Mutu, Tabita Rezaire, Sedrick Chisom, Rashaad Newsome, Cauleen Smith, Kara Walker, Chris Ofili and Ellen Gallagher – “create moments of possibility, moments of utopia, moments of otherness that go beyond otherness”. He traces the roots of Black Fantastic to “pioneering authors, musicians and filmmakers of the 1960s and 1970s such as Octavia E. Butler, Henry Dumas, Amos Tutuola, Sun Ra and Ousmane Sembene”. Looking around the art scene today, he suggests that if “you look at music with Solange or Lemonade, or a movie like Black Panther (2018), a show like Lovecraft Country (2020), NK Jemisin fictions, etc, you recognize that there are many people who speak this language at the moment, who explore this territory.

To demonstrate this breadth of vision, the expanded program surrounding the exhibition includes, among other events, a season of features and shorts by visionary African diaspora filmmakers at the British Film Institute programmed by Eshun and an inter-arts event with texts selected by editor and literary critic Ellah Wakatama. This included texts by authors who draw on African folklore, such as Chigozie Obioma, Chinua Achebe and Afia Atakora, the diaspora experience and the Afrofuturism of contemporary speculative fiction.

It is worth listing all of this to show the breadth and variety of this view – rather than a rigid movement or category – but also to recognize that within this diversity there are multiple readings. of this phenomenon. Wakatama, for example, creates a chronological survey which, as she explained in her “Bad Form” interview with Sophie Marie Niang, includes “African writers of the 1950s who were beginning to talk about traditional lives”, “classics of fantastic noir”, and new fiction, non-fiction and poetry that questions “traditional literary categories of what is or is not fantastic”. She takes the conversation to a different place, engaging different authors and creating a 90-minute collage of authors speaking over the years in a way that demonstrates the coherence and challenge of a Space Afrika soundscape and a background of digital landscapes created by visual artist Alistair. MacKinnon.

As there is no general movement, umbrella group or overarching manifesto, the exhibition is formed through individual rooms and diverse styles. Diversity is also found in the media – painting, photography, video, sculpture and multimedia installations – and the materials – shells, living plants, volcanic rock and 24 carat gold.

Although there is no overarching narrative, there are connecting concepts. One of them is gluing. Mutu uses collage as a way to destroy those hierarchies she doesn’t believe in. These include hierarchies of gender, race and class, as evidenced by images ripped from magazines celebrating cars or pornography which are then pieced together to fashion fantastical female figures engaged in mythical activities. Eshun, in an interview with Jeffrey Boakye, speaks of collage as rejecting linear narratives through “a collapse of time”. The layering involved in the collage “brings together fact, memory, sensory impression, color, beauty, pain and horror”.

Another concept of connection is the visualization of new ways of being. Nick Cave’s “Soundsuits”, a series of wearable artworks begun 30 years ago in response to the brutal beating of Rodney King by police in Los Angeles, draws on carnival traditions in their decoration, their materials and sense of personal agency, while masking the wearer’s gender, race, and class, taking the works, in Eshun’s words, “into a space of self-constructed fictions, of being self-constructed “.

Double consciousness is a term coined by the great African-American sociologist, WEB Du Bois. It means, as Eshun explains, “seeing the world twice as a black person. Once through your own eyes, once also through a society that looked at you, as he said, with hatred and contempt. So, in addition to seeing the world through your own eyes, you also see it through white eyes, through society at large. For Du Bois, it was a legacy of burden. Chisom and Walker’s works probe the parasitic ideology of whiteness and the American history of racial violence. A stop-motion animation by Walker weaves a nightmarish story of racial violence and domestic terrorism based on events in recent history, including the storming of the US Capitol in 2021.

A fusion of past and future occurs in many works, with Viktor speaking of “looking at ancient cultures to tell the story of our place in the universe”. She appears in his series ‘A Haven. A hell. A deferred dream.’ – which relates to the history of Liberia – as a Libyan sibyl who foresaw the transatlantic slave trade and was a reference for certain groups of the 19th century abolitionist movement. According to Eshun, these artists “recognize that part of our collective heritage is linked to historical facts, but also to ideas constructed from myths, from shared stories. And they make no distinction between looking back or looking forward. And that’s part of the territory that we can occupy and explore.

Additionally, some works involve an attack on myth, utopias, or spiritual belief. Rezaire’s immersive cinematic installation critiques Western conventions of narrow binaries by invoking a spiritual connection to pre-colonial Africa. Smith draws from science fiction, Afrofuturist literature and experimental jazz to address themes of community and Afrofuturist utopias in an immersive installation. Cave speaks of the ceremonial quality embodied in works such as his arm casts with tole flowers as “altars, shrines – those alternate relics that contain a spirit.” Eshun speaks of “Black artists drawing on African-derived myths, knowledge systems, and spiritual practices to confuse the Western dichotomy between the real and the unreal, the natural and the supernatural.”

The artists of “In The Black Fantastic” reinvent the way we represent the past and think about the future, while confronting us with the challenges and conflicts of the present. The fantasy element has nothing to do with escapism; instead, it considers other ways of being and confronts socially constructed ideas about race. The exhibition seeks to create multi-dimensional aesthetic experiences that bring the viewer into new environments somewhere between the real world and a wide variety of imaginary worlds.