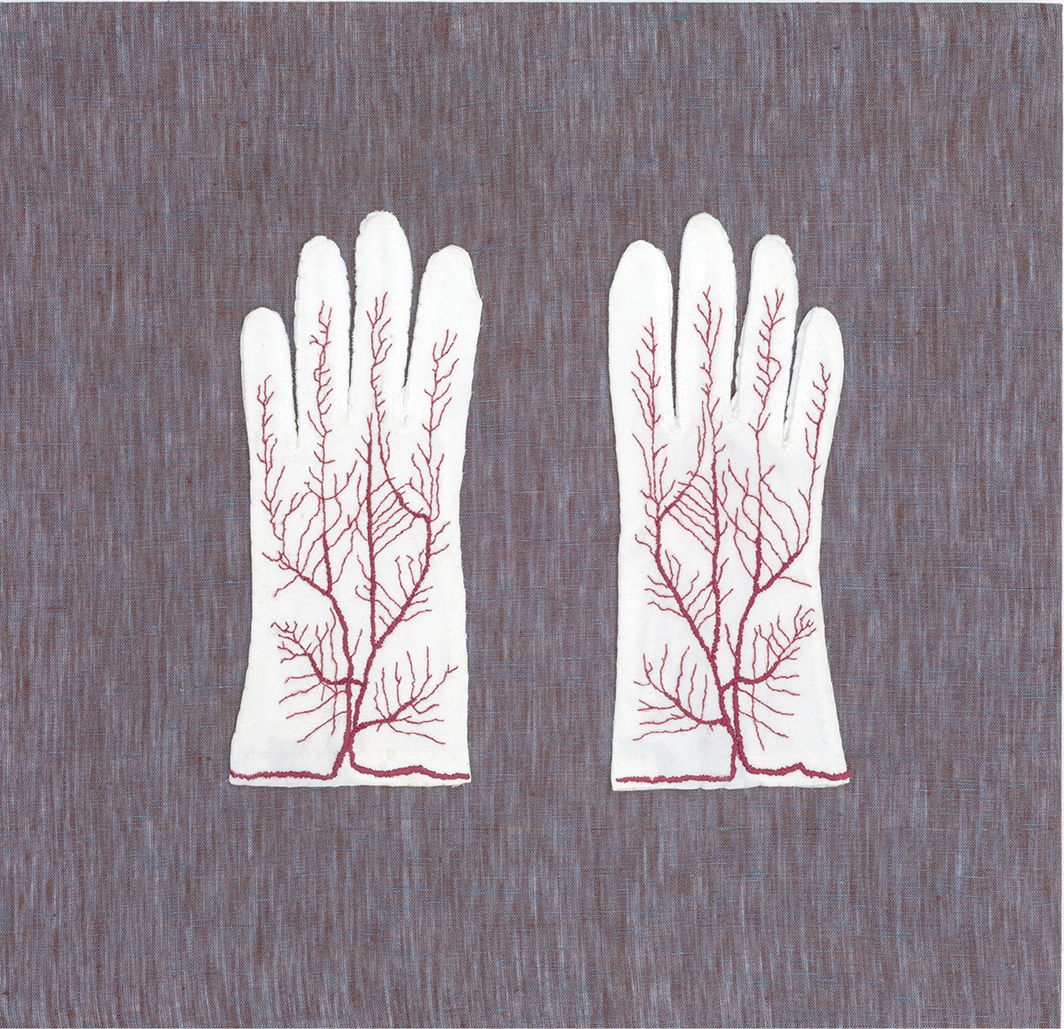 “Later, I was able to perform a more sophisticated maneuver by doubling down and reversing the injunction against AbEx, performing a critique of the critique, a critique that allowed me to appropriate AbEx as a practice and to turn it into the form I wanted it to take on. This line from Amy Sillman’s fabulous essay “Ab-Ex and Disco Balls: In Defense of Abstract Expressionism II” – published in these pages in 2011 – came to me mind when I saw Elaine Reichek’s second solo exhibition at Marinaro, “Material Girl,” where she turned her gimlet eye to the long, intertwined history linking painting, abstraction, and textiles.

Hugging a corner and an adjacent wall of the gallery, respectively, were JP Textile/Text 1 and 2, both from 2021. At first glance, they appeared to be found objects, consisting of long strips of mottled fabric stretched from metal wall-mounted dispensers. Yet after a little more time with these works, I saw Reichek poking fun at Jackson Pollock’s overcooked legacy (and Harold Rosenberg’s designation of lazy AbEx as “apocalyptic wallpaper”). Each piece features a length of Kravet Inc.’s Spatter Fabric – a commercially printed textile with an all-over Jack-the-Dripper effluence – onto which Reichek has digitally stitched twenty-five quotes from the artist’s extensive bibliography . Of Jackson Pollock, Frank O’Hara’s 1959 book about the painter, to a 2017 volume in the New York Museum of Modern Art’s Artist Series, each reference has been given its own distinct typeface and placed within the composition – in a curved or slanted line, in a circle or intersecting with other text – at least three times along the length of the fabric. Using two versions of Spatter, Reichek mimicked the colorways of the textile with several yarns of similar hues. Consequently, Pollock’s critical, commercial and mainstream successes were undermined by Reichek’s complicated and clever brand of nuance – a Sillman-like “twist”.

On a nearby wall, twenty-six digital and hand-sewn embroideries of varying sizes were hung in living room fashion. The installation looked like a collection of works by artists who depicted fashion, interior design and other forms of angewandte kunst through the centuries – from Albrecht Dürer’s pillow renderings and Michelangelo’s drapery study to Edgar Degas’ bows and Eugène Delacroix’s Algerian dresses, Varvara Stepanova’s sportswear and, my favorite, the representation of a faceless Pierrot by Jean-Antoine Watteau. Borrowings from Bronzino, John Currin, Artemisia Gentileschi, Kerry James Marshall, Wayne Thiebaud and Édouard Vuillard, among others, were also on display. It was fun to guess which piece was hand-made by Reichek and which wasn’t (hint: the densest pieces were digital), and then to realize that each piece essentially took the painting back to its basics, c ie to the canvas, to the fabric.

A few other works containing excerpts from writings by Tracy Chevalier, Susan Howe and Barbara Pym recalled Reichek’s last solo outing in this gallery, “Sight Unseen”, which featured embroidery borrowing lines from stories, plays and poems. (Remember that the words text and textile both come from Latin texereweave.) Turkey-Work (Susan Howe), 2020, for example, quoted the titular poet’s lines on “one of the most misunderstood materials in decorative art studies”, a form of needlework that has its roots in 16th-century England – a bastardy of the weaving technique used to make Turkish rugs. Appropriately, a bright red turkey frame surrounds the textile.

In a second piece, Reichek staged an ironic homage to Henri Matisse: On a commercially made rug with organic patterns based on the painter’s cutouts were examples of the types of living room furniture Matisse owned alongside several potted Monstera plants (whose shapes inspired the artist to create the cutouts) and a double-sided green velvet room divider. Images of these partitions are found throughout his oeuvre, and on his Reichek affixed an assortment of ready-to-use Matissean products, with images from his studios and source images, emphasizing his colonialist and sexist gaze. Beautifully documented, the installation also included a grid of samples reproducing the Blue Nude II, 1952, and brightly colored, hand-embroidered reproductions of his notes for three of his tapestry works. Imitation is the sincerest form of flattery, but Reichek’s work is not mediocre by any stretch of the imagination, for few artists have deconstructed and dismantled the myth of the modernist male “genius” as bitterly as she did it.