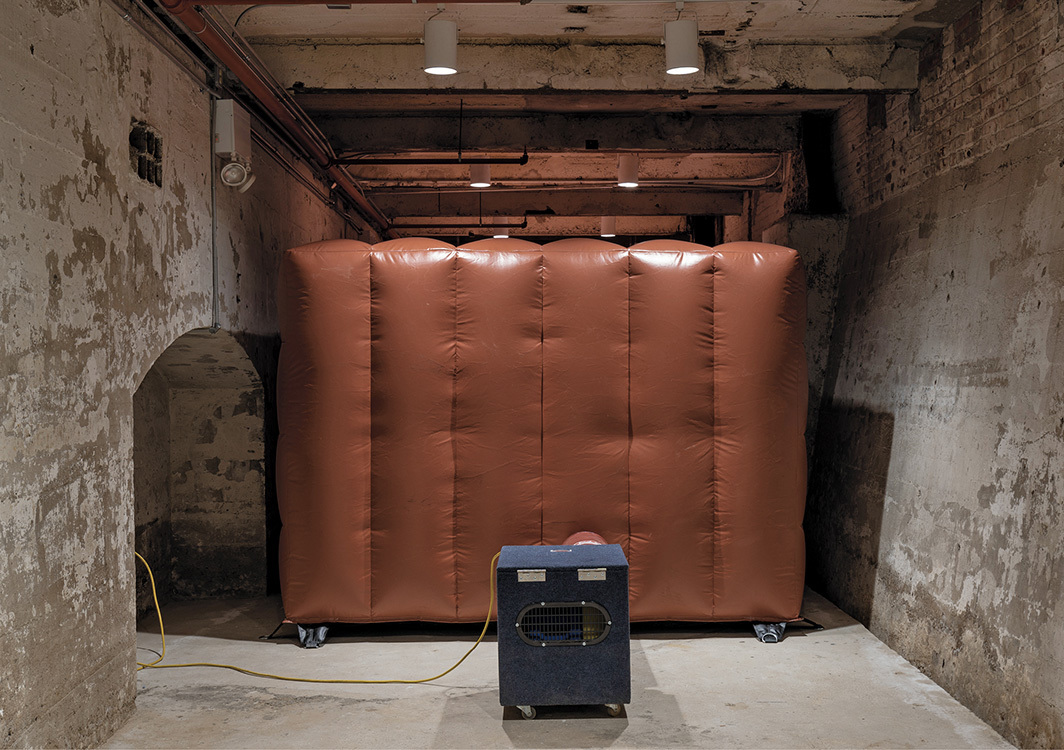 For this exhibition in three separate acts – a sort of non-collective collective exhibition – Niloufar Emamifar presented works related to the archives of SculptureCenter, covering its foundation as the Clay Club in 1928 to the present day. The pieces were displayed in the maze of narrow corridors on the lower level of the institution. SoiL Thornton blocked an entrance to this sepulchral space with their enormous “Husband” chair (SC), 2021, a brown vinyl cube attached to a Quiet Box fan, and displayed a selection of conceptual clothing made from materials such as foil, bells, and yarn. Upstairs in a compact reading room were free copies of Svetlana Kitto Sara Penn’s Knobkerry: An Oral History Reference Book (2021), which includes newspaper clippings, archival photographs and fourteen interviews about the titular artist / fashion designer and her groundbreaking boutique, Knobkerry. (A PDF of the book was also available on the nonprofit’s website.) At first glance, it wasn’t clear how this trio of separate projects tied together, but notions of access seemed common to all.

This exhibition was atypical insofar as it truly benefited from close reading, especially from the interviews with Kitto. We learn that Penn, who died in 2020, was an innovative black businesswoman and demanding textile enthusiast. Born in Pittsburgh in 1927, she opened Knobkerry in 1965 and for thirty years and at five locations, from New York St. Marks Place, East 7th Street and SoHo to Pasadena, Calif., Then again on the east coast in Manhattan’s TriBeCa. – she sold a range of international products, such as “woven ikat dresses, Nepal palace guard robes, African ceremonial chairs and wooden Buddhas”, as reported by the fashion editor AndrÃ© Leon Talley in a 1977 article for Daily women’s clothing. One of the images accompanying Knobkerry’s profile by Talley shows a filigree silver Indian betel nut case that Penn transformed into a minaudiÃ¨re.

Knobkerry was a vital resource for the cultural avant-garde: Don Cherry, Ornette Coleman, Jimi Hendrix and Janis Joplin are mentioned as clients in the book, as are Jean-Michel Basquiat, Louise Bourgeois and Louise Nevelson. David Hammons put on an underground show at the location of the TriBeCa store in 1995. â€œJust as Sara Penn was more than a shopkeeper, Knobkerry was more than a shop; I heard that it was a gallery, a museum, a workshop, a cafÃ©, a cultural center, a living room and a sanctuary â€, notes Kitto in his introduction. Above all, it was a successful business, and it did something more than those contemporary brick-and-mortar business ventures of the downtown New York art scene (like the artist restaurant Food in SoHo and the Pop-art touchstone by Claes Oldenburg The shop, 1961). Fashion designers have given Knobkerry credit for pioneering the hippie “Woodstock look”. Knobkerry clothing has been enthusiastically adopted by a variety of media, from polished lifestyle glosses to Saturday night message (its July 27, 1968 issue featured a young Lauren Hutton without a bra on the cover wearing an assortment of Knobkerry items). Despite her accomplishments, Penn is relatively unknown, in part because of racism, sexism, and black culture appropriations. In a letter to a magazine editor who did not credit Knobkerry’s contributions in a photo caption, Penn lamented, â€œIf I sound paranoid, it’s only because I’ve been a pioneer in my field and saw others come away with my ideas and be accepted. and recognition.

With her piecemeal approach to organizing the exhibition, curator Kyle Dancewicz has managed to sidestep those boring clichÃ©s about an institution’s ‘rediscovery’ of Penn, while at last acknowledging his myriad contributions to culture. . Still, I would have loved to see some of Penn’s Knobkerry’s clothing and custom-made artwork. It is a wish that I express here for the textile experts at the Costume Institute of the Metropolitan Museum of Art in New York.