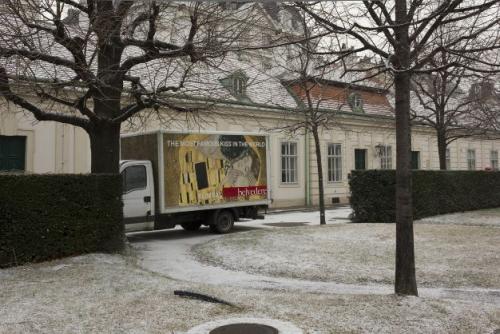 The works of art stolen by the Nazis are the last prisoners of the Second World War.

Ferdinand Bloch-Bauer was a wealthy sugar magnate in Vienna, Austria, where his six Gustav Klimt paintings were kept. His wife, Adele Bloch-Bauer, was the subject of two of the paintings. On March 12, 1938, the Nazis invaded and claimed to annex Austria. Ferdinand, who was Jewish and had supported efforts to resist annexation, fled the country before the Nazis, eventually settling in Zurich. In his absence, the Nazis took over his house and seized his works of art, including paintings by Klimt. Adele Bloch-Bauer I is one of them and ended up at the Austrian gallery.

After a long legal battle over ownership of the painting in the U.S. Supreme Court[1] and arbitration in Austria[2], the painting was eventually returned to Maria Altmann, Ferdinand’s niece and heiress who resided in California after fleeing Austria. In a subsequent private sale in 2006, Jewish philanthropist Ronald Lauder bought the painting for $135 million to display in his Neue Galerie, located on 5th Avenue in New York City.[3]

An attentive visitor to the Neue Galerie will probably find a panel there acknowledging some of the historical facts mentioned above. Indeed, on August 10, 2022, New York Governor Kathy Hochul signed into law a new requirement that museums whose works of art have changed hands through theft, seizure, confiscation, forced sale or other unintended means during Nazi-era Europe of displaying a sign acknowledging this information.

In fact, New York State has attested that the Nazis looted some 600,000 paintings from the Jewish people during World War II, as part of Third Reich crimes committed to eliminate all vestiges of Jewish identity and culture. Jewish cultures. Many eventually made their way to museums in New York, and museums displayed these stolen works of art without acknowledgment or transparency around their origins.[4] Introduced on January 28, 2021 and passed unanimously in the New York State Assembly, this new legislation was part of a package of legislation to honor and support Holocaust survivors, whose number is estimated at 40,000 in New York State. [5]

Incorporated into New York Education Law § 233-aa as the 15th subdivision, this new one-sentence law states: “Any museum that exhibits identifiable works of art known to have been created before nineteen hundred forty-five and which changed hands due to theft, seizure, confiscation, forced sale or other unintended means in Europe during the Nazi era (1933-1945) shall, where possible, place a sign or other signage acknowledging this information with such display. This article will briefly discuss some highlights of this new legislation.

Considered in conjunction with other provisions of New York Education Law § 233-aa, you will find that “museums” are not just museums. Instead, they also include various types of government entities or non-profit corporations in similar situations. Under the 1st subdivision of § 233-aa, “museum” is defined as “any institution, including but not limited to museums, historical societies, zoos, aquariums, botanical gardens and arboretums, having collection as a declared objective in its charter. , or owning or holding collections, or intending to own or hold collections, that is a government entity or not-for-profit corporation.

Basically, the law expands the means of acquisition to include various involuntary means.

Previously, a similar disclosure practice was encouraged by the Association of Art Museum Directors (“AAMD”) and the American Alliance of Museums (“AAM”). AAMD said in Report of the AAMD Working Group on the Looting of Art in the Age of Nazis and World War II (1933-1945) that if a member museum were to determine that a work of art in its collection was illegally confiscated during the Nazi/WWII period and not returned, the museum should make this information public.[6] The AAM has published guidelines on “illegal appropriation of objects during the Nazi era”. He recommended that “if credible evidence of illegal appropriation without subsequent restitution being uncovered by research, the museum should take careful and necessary steps to determine the status of the object, in consultation with qualified legal counsel. These measures should include publishing this information and, if possible, notifying potential applicants. »[7]

One limitation of these guidelines is the terms ‘unlawful confiscation’ and ‘unlawful appropriation’. In fact, the scope of Nazi art taking was much broader than just “unlawful confiscation” and “unlawful appropriation”. New York law covers art sold not necessarily by these illegal means, but by “other unintended means” during the Nazi era, including a number of scenarios like so-called “theft goods” which were not stolen outright, nor sold under duress, but left behind by hasty flight from persecution.[8]

A recent case, Zuckerman versus Metro. Art Museum[9] illustrates another situation that could plausibly be considered “involuntary means”. Paul Friedrich Leffmann and Alice Leffmann were a wealthy German Jewish couple who owned The actor, a painting by Pablo Picasso. When the Nuremberg Law came into effect, the couple were forced to sell their home and business in exchange for symbolic compensation. Stripped of most of their possessions, they fled Nazi Germany for Italy in 1937. However, Italy did not prove a safe destination as the Jews were at risk of arrest and deportation and died due to the spread of anti-Semitism in Italy. With no source of income, the couple lived as refugees, were unable to work and had no choice but to sell whatever assets they had in cash to fund their move from Italy to Switzerland. In 1938, the couple, fearing for their freedom and their lives, had to sell The actor to a pair of notorious art dealers (the U.S. State Department later identified one of them as a dealer in Nazi-looted art) at the very price they had told the same dealers they would not take into account during a previous negotiation. The painting was sold twice more before being donated in 1952 to the Metropolitan Museum of Art (the “Met”). [10] Although Laurel Zuckerman, Leffmann’s great-grandniece who claimed restitution, was unsuccessful in retrieving the painting, she will likely see the Met put up a sign acknowledging this information as the means by which art dealers art have acquired The actor could be considered “involuntary” given the threatening environment, the couple’s limited financial resources, and the low price they would not initially agree to.

However, the new law is silent on some important details of the information disclosure requirement.

About 10 years ago, AAM formulated Recommended procedures for providing information to the public about objects transferred to Nazi-era Europe (“Recommended procedures”). [11] It identified 20 categories of information about covered objects that museums should make available to the public, including artist/creator, date of work and acquisition, and provenance. It’s only a start, but it’s not enough because it doesn’t address some more practical issues such as how best for museums to apply this new law, what curators should say, where the does the information have to go exactly and how can museums present it in a way that visitors read it and understand the issues because they are complex issues.[12]

Obviously this recent legislation from New York only covers European artwork that was taken during the Nazi era, but in recent years there have been many conversations about non-European artwork that has been taken illegally taken from countries in Asia and Africa to the United States. the next step is for lawmakers to consider requiring museums to label these “prisoners” as well.

*Zach Dai is a legal assistant in the firm’s Century City office.

[10] 64 years later, Laurel Zuckerman, the Leffmanns’ great-grandniece, claimed that her ancestors sold the painting under duress, thus voiding the transaction. Finding that Zuckerman had not sufficiently pleaded duress and that Zuckerman’s claims were statute-barred under New York’s statute of limitations and the fair laches doctrine, the trial court dismissed the case. (See Zuckerman versus Metro. Art Museum, 307 F. Sup. 3d 304.) Zuckerman appealed. Without mentioning anything about duress on the merits, the 2nd Circuit Court of Appeals upheld the trial court’s decision simply relying on the laches doctrine.