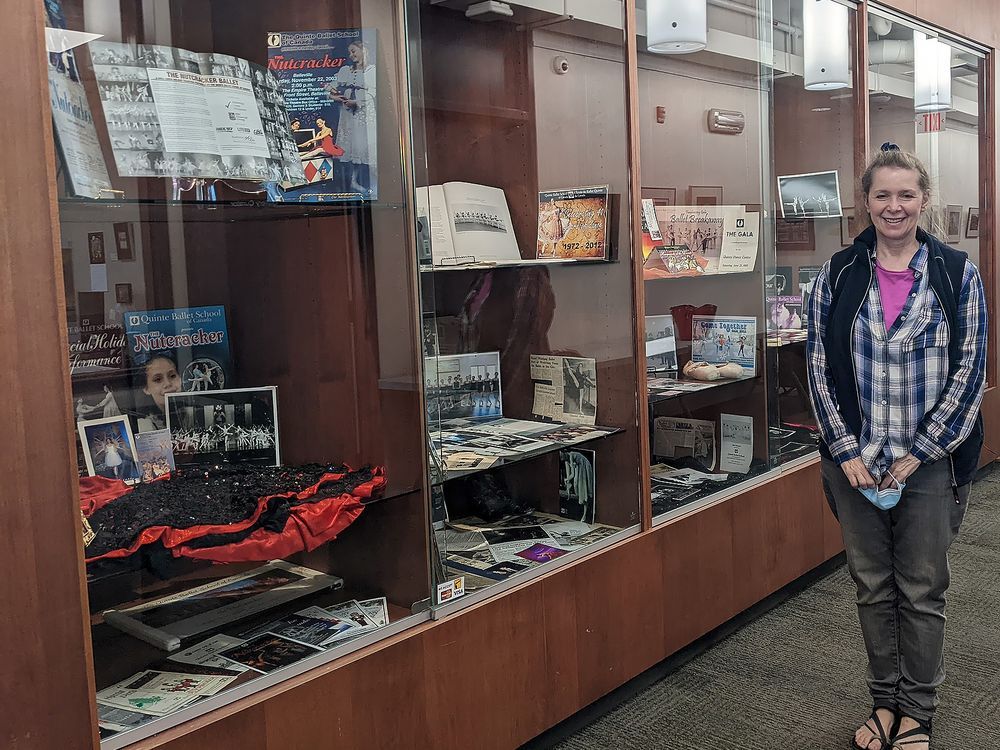 The Quinte Ballet School of Canada (QBSC) celebrates its 50th anniversary with a special exhibit of dance memorabilia, photos, pointe shoes and costumes on display at the Belleville Public Library’s John M. Parrott Art Gallery until to June 30.

Volunteers Alanna Kalnay and Donna Kelly have combed through QBSC’s extensive archives and wardrobe to select memorabilia that highlight 50 years of dancing at QBSC.

The exhibit includes The Nutcracker and Spring Showcases through the ages with colorful Holiday Dance costumes and programs and photos of Vocational Program alumni who danced various roles in the two annual CSQQ productions. Photos of the many teachers Founding Artistic Director Brian Scott invited to teach at the school are featured in the exhibit along with Brian Scott’s Queen Elizabeth II Diamond Jubilee Medal recognizing his dedicated contribution to the community. Alumni will recognize in photos many of the studios QBSC has called home for over 50 years.

One of the contributors to the QCBS 50th Anniversary Library exhibit is Helen Kelly, an original member of the Belleville branch of the National Ballet of Canada established in 1956 before the school opened. The Guild approached the National Ballet to recommend a ballet teacher and Brian Scott came to Belleville and soon the Quinte Dance Center was established in 1972. The school moved to larger premises three times before settling in a new facility at 196 Palmer Road built for the school. in 2002. A strong group of volunteers, mainly parents, maintained, raised funds and managed the school which grew very quickly. Photos and programs from the many CSQQ fundraising galas are on display at the Parrott Gallery.

June has other celebratory moments for QBSC’s 50th anniversary, including Artistic Director Catherine Taylor’s 10th anniversary video by Drew Berry launched during the Dance of Spring performance at the Empire Theater on June 11 in 6:30 p.m. The Dance of Spring performance by QBSC students in the professional training program also features a new video created by the seven CSQQ graduates. Dance of Spring features ballet highlights from Sleeping Beauty, original choreography of many dance styles – jazz, modern, hip hop and flamenco to the music of Bolero. Reserved tickets for Dance of Spring are available at The Empire Theater at 613-969-0099 or online at www.theempiretheatre.com.

After the performance of Dance of Spring on June 11, the special fundraising event for the 50th anniversary of the CSQQ – Ballet & Bubbly – The Afterparty will be held at Venue 1906, 34 Victoria Avenue in Belleville. Guests will raise a glass of “sparkling” to celebrate the CSQQ’s 50th anniversary and reconnect with former board members, host families, staff, alumni, supporters and meet student artists.

Quinte Ballet School of Canada is a non-profit, charitable organization committed to teaching, promoting and presenting the joy of dance at the professional and recreational levels. Faculty and staff are dedicated to creating an inspiring and supportive environment that encourages talented young people to pursue careers in the dance industry, while offering a variety of evening and weekend classes for people of all ages. ages who love to learn and dance.