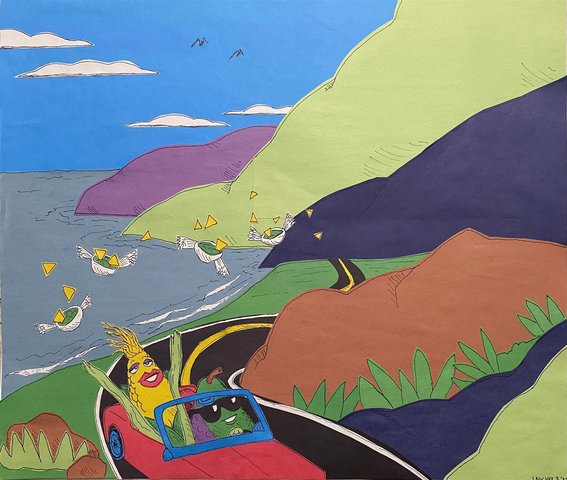 Works by area artists – including five from Turlock – on the “California experience” are featured prominently in the new juried exhibition in the Lobby Galleries of the Carnegie Arts Center.

The dream of success has brought millions to California – dreams of gold, fame, and creative freedom have fueled the imaginations of adventurers, entrepreneurs, and artists around the world. The myth of California as a place of peace and prosperity dates back to the days of the conquistadors with the tales of Queen Califia and her golden island. In more modern times, the lure of stardom in Hollywood and the promise of opportunity in Silicon Valley has drawn aspirants of all kinds. Since John Muir’s first visit, naturalists and climbers have made pilgrimages to Yosemite Valley, while those seeking the freedom to experiment and express themselves have flocked to San Francisco since the 1960s. dreams of a better life, California may seem like the “Golden Ticket” state.

“We asked artists to explore their Californian dreams. How they see our state, with its past and present promises,” said Lisa McDermott, director of the Carnegie Arts Center. “The artists responded with a wealth of imagery and interpretations of the theme. We are excited about the variety of media and vision represented on the show.

The juror for the exhibition was Jonathan Bock, an artist, business owner and non-profit leader with a lifelong passion for the arts. With a bachelor’s degree in printmaking and art history from Indiana University and a master’s degree in fine arts from the California Institute of the Arts, his works include drawing, painting, printmaking, photography, ceramics, experimental film and video, animation and interactive media. He owns the Williams Gallery West in Oakhurst, specializing in American and international fine and folk art; and Stellar Gallery, specializing in fine art photography.

The exhibition will run through January 21, 2023. Gallery hours are 10 a.m. to 5 p.m. Tuesday through Saturday. Admission to the Lobby Gallery is free. The Carnegie is located at 250 N. Broadway, Turlock.

Artists included in the exhibition: