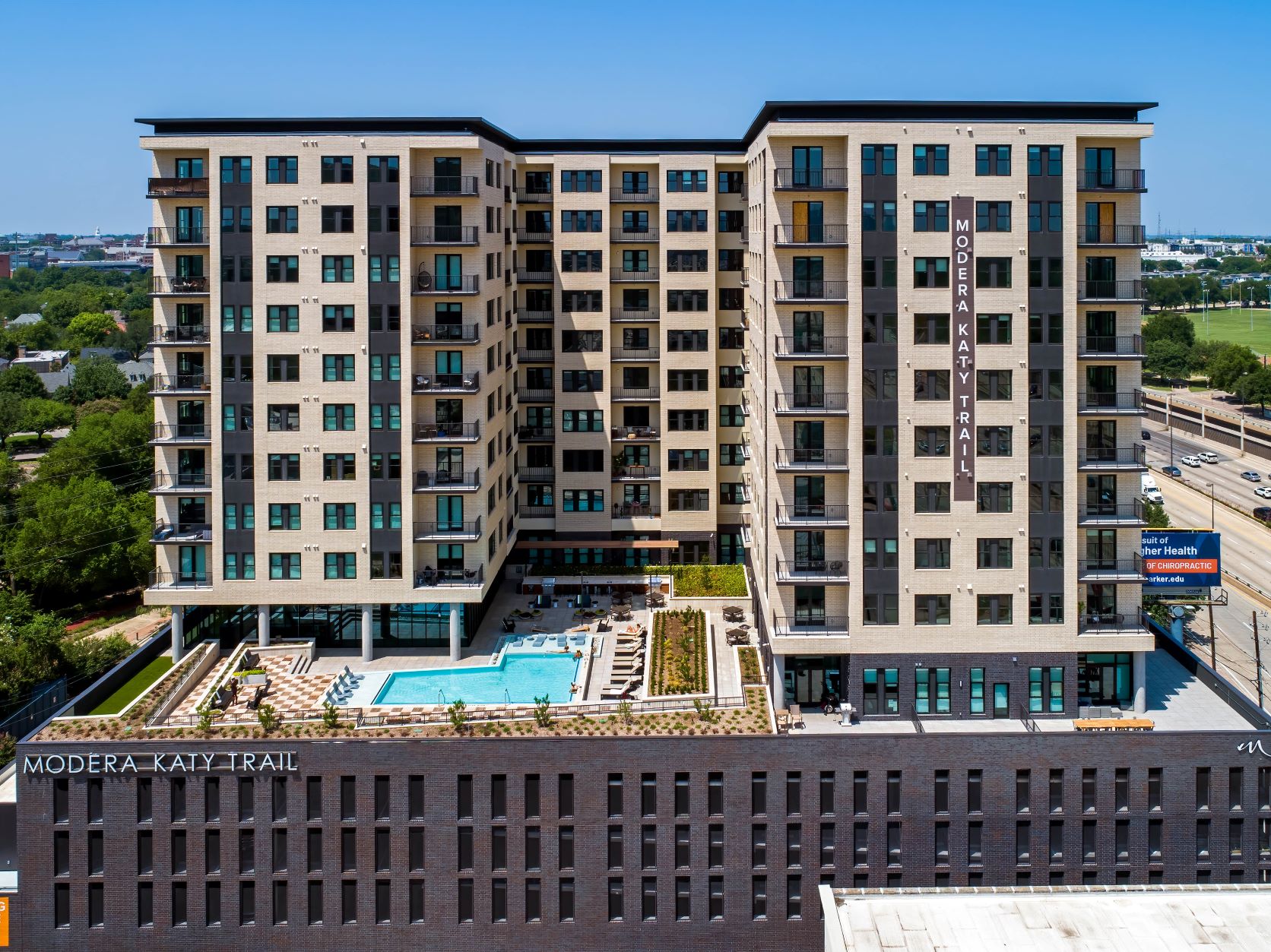 To achieve the building’s desired density within the context of its urban location, BKV Group used a light gauge steel construction process in the design and delivery of Modera Katy Trail. An innovative approach to the Dallas market, lightweight steel construction was selected based on the BKV Group’s meticulous research into zoning, building codes and technology, and through working with contractors to identify the system most cost effective and high density for the site. Using this tactic, which integrated the lightweight steel structure with a concrete podium base, allowed BKV Group to fulfill the developer’s vision for the project while saving time, reducing construction costs and reducing the building’s carbon footprint, as the technology is more sustainable than traditional technology. concrete construction.

The building’s location—at the intersection of Katy Trail and McKinney Avenue in downtown Dallas—influenced the types of amenities offered at Modera Katy Trail. With the lobby located just steps from the start of Katy Trail, a popular recreational trail built on the former Union Pacific Railroad line, BKV Group has incorporated shared spaces that allow residents to enjoy a lifestyle active outdoors, including a community porch overlooking the trail.

“The Modera Katy Trail location had been abandoned over the years due to density requirements primarily suited to a timber frame project, but due to BKV’s expertise and knowledge in the use of steel thin and prefabricated, we were able to come up with a design concept that fits into the zoning specifications,” said Jonathan Delcambre, Design Manager and Managing Partner of BKV Group. “The resulting development is unique in the Dallas market, not only in terms of the type of construction, but also in terms of the expansive southerly views towards the city, on-site amenities and lifestyle opportunities afforded by its location along the trail.”

Taking inspiration from the building’s natural surroundings, BKV Group incorporated floral motifs and botanical design elements into the shared spaces of Modera Katy Trail. These details are juxtaposed by an understated palette that emphasizes varying textures to create a serene environment throughout. The exterior facade features dark gray brick with iron dots on the podium and a transition to ivory white brick with dark gray accents interspersed on the upper towers. These double pallets, combined with the articulation of the garage openings, recall the keys of a piano – a nod to Steinway Hall, the exclusive Steinway & Sons piano dealer in the area, located next to the building. A salon on the ground floor of the property with a Steinway & Sons grand piano also pays homage to the notable neighbor.

Through a curated art program, BKV Group has selected images for the property’s common areas that feature natural scenes representative of the region. The iconic artwork, located in the first-floor mailroom, is a wall-to-wall collage done in sepia tones that brings the history of Katy Trail to life through photos of vintage steam locomotives along the along the railway line and a vintage railway map of the Region.

“Modera Katy Trail’s exterior and interior seek to tie the past to the present, a theme that has inspired everything from the artwork on the walls to the sage green tones of the furniture,” said Joan Sizemore, Director of the interior designer and associate partner at BKV Group. “It was also imperative to include elements associated with Texas itself, such as bluebonnets and different shades of leather, which are tastefully incorporated throughout to evoke a sense of place.”

Indoor facilities include a bike and rideshare lounge, a pet spa and dog wash off the lobby and a fully equipped fitness center, club room with coworking spaces and games and a conference room on the fifth floor. Breathtaking views of Uptown and downtown Dallas can also be enjoyed from the fifth-floor amenity area, which includes a landscaped pool deck with outdoor dining areas and fire pits. On the penthouse level, residents have access to a clubhouse lounge with private dining areas, fireplace and bar.

Modera Katy Trail offers studio, one, two and three bedroom apartments with a collection of 14th floor penthouses and ground floor townhouses overlooking Katy Trail. The residences feature wood plank floors, modern kitchens with quartz counter tops and custom cabinetry, double sink bathrooms and plenty of storage. A selection of units feature 10-foot ceilings, as well as balconies and patios allowing residents to enjoy the outdoors in the privacy of their own home.

BKV Group is currently in the planning stages of two more Dallas-based projects, a 16-story mixed-use development in South Harwood and a 25-story transit-focused development in the Deep Ellum neighborhood.