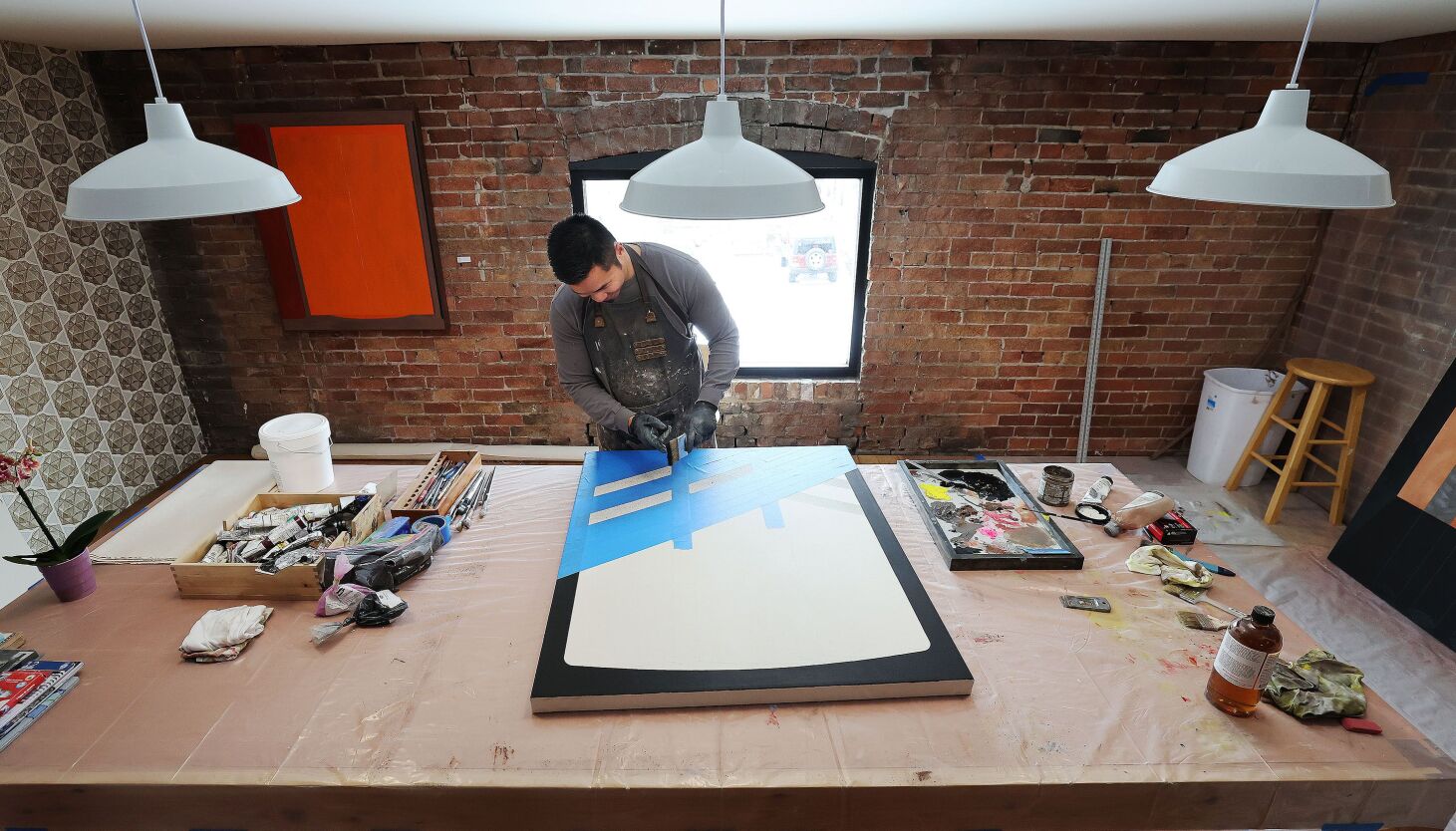 In a bright studio at Salt Lake’s Modern West Gallery, visual artist Laura Sharp Wilson – 56, with lapis blue eyes, bobbed blonde hair and a collarless T-shirt on a hot March day – is working on a new collection of textile-inspired pieces that explore society’s relationship to nature and the charged meanings of heirlooms, like her grandparents’ teacups, which she says offer a unique way to investigate issues of class and race.

“I’m interested in what European immigrants thought of this country, my great-grandparents who emigrated and settled as working-class farmers in St. Louis or Jersey City – what did they think racial situations and the melting pot of this country? ” Wilson said. “Did owning a silver tea set make them feel ‘better than?’ What I love about visual art is that it gives you new ways to have that conversation.

Wilson strikes up this conversation as one of the current artists-in-residence at Salt Lake’s Modern West Gallery, whose residency program is helping fuel the state’s creative comeback after the pandemic-induced decline in arts patronage thanks sponsorships that facilitate the work of emerging and mid-career artists. The unique program comes at a time when artists say cultural work is vital to repairing the collective pain and uncertainty of recent years.

“I can’t think of any other examples of commercial galleries that have artists like us actually working in the gallery. It’s quite unusual. I lived in New York, North Carolina, Washington State. I’ve lived everywhere and never seen it before,” Wilson said. “So it’s a huge contribution to the arts community in Salt Lake.”

Modern West, founded in 2014, promotes an aesthetic to “reframe our understanding of the American West,” including works like those by rising visual artist Billy Schenck, whose style invokes cinematic imagery in warm colors and examines the clashes between wilderness and civilisation. , and whose only landscape exhibition at the gallery, “A land less frequented», ends this month after a successful run.

Not content with selling art, the gallery’s residency program has hosted many local artists who it hopes will contribute to the creative momentum of a city whose art scene is quickly making a name for itself on the the cultural map of the country.

Prepared for a life of art

The Modern West residency is the latest stepping stone on a long road for Wilson, whose upbringing prepared her for a life of art.

His art-loving grandparents regularly towed Wilson through major museums in Washington, DC, where they lived. Her mother worked as a modern dance choreographer and exposed her to theater and dance performances while growing up in New York and New Jersey.

After earning an MFA from the University of North Carolina, Chapel Hill, Wilson pursued her interest in costume design, returned to acting, and later studied surface textile design at the University. of State in North Carolina before apprenticing at the Fabric Atelier in Philadelphia.

Now Wilson brings together the range of his interests and experience in the Modern West studio, where his work oversees the collision of visual and textural worlds, and simultaneously nods to realism and abstraction.

His signature style are pieces of graphic, acrylic, and fabric on mulberry paper, a canvas-like medium of plant fiber preferred by Wilson for its textured, translucent body, which is sturdy despite its lightness.

Mulberry paper was first sought as a practical solution to the expensive expense of shipping canvases – in anticipation that they would roll up like a scroll. Although she decided not to roll her finished works, she nevertheless retained the mulberry for its texture and fabric quality.

“Honestly, I feel like I’m doing a different job than I would if I wasn’t here. It makes the process fresh.

Opposite Wilson, in a west-facing studio, Kheng Lin is busy working in a different style that examines the relationships between opposites in color field abstraction with oil on canvas.

Lin, 37, was born in Kuala Lumpur, Malaysia, into a Buddhist family from which he stood out in two main ways: he was the only one interested in pursuing art and the only one to convert to the Church of Jesus Christ of Latter- day saints. When he moved to Utah in 2011 to study fine art at Brigham Young University, he was moved by the vastness of the West.

“I remember the first time I came to Provo from the airport, it was really impressive how close the mountains are and how big they are. And later seeing places like the Salt Flats, my mind couldn’t comprehend the space there was,” said Lin, who compares it to the cramped, dense cityscape of her upbringing in Southeast Asia.

“In my art, I gravitate around simple shapes and open color fields. The Utah landscape really influenced me in that way. My work is about chaos and order, and that’s exactly how I felt while driving through these vast expanses. There are no limits but there is no control. I felt like I could do anything, but I couldn’t do anything at the same time.

Out of college, Lin worked in a furniture store before putting his carpentry skills to good use in his own frame-making business, which supports him and his 4-year-old daughter, but doesn’t let him. always the time he would like for his art. He says the residency helped him by highlighting the importance of painting in his life and resulted in a psychologically expanded sense of self-discipline.

Although for Lin, the greatest value of the residency may be the formal association with the gallery, which provides community and creative inspiration while increasing his name recognition as an artist, which is essential to achieving his ultimate goal of living an independent artistic lifestyle. .

“My endgame would just be painting, making art, like a full-time artist,” said Lin, who thinks the residency is pushing him in that direction. “Institutions give an air of credibility to an artist. The gallery did a great job of promotion and the final exhibition will provide exposure. I feel like they really want to help artists.

Modern West aims to be more than a shopping arcade. In addition to its residencies, it offers community workshops, talks and events, taking advantage of a tasteful indoor space adorned with the works of more than 30 local artists, as well as mid-century wicker chairs and plants. in pots that produce a stylistic and disarming atmosphere to once.

“It’s a shopping mall, but it’s also a bit of a community centre. The way the gallery is laid out creates an opportunity for people to come in and experience what some of the artwork would look like if it were in your living space,” Wilson said.

Community is especially crucial in an industry where sacrifice, even for established artists, is commonplace.

Wilson, for example, has achieved many milestones in his artistic career, as well as numerous residency awards, including Artist-in-Residence of the Huntsman Cancer Center, and representation by the McKenzie Art Gallery At New York. However, creative works alone cannot sustain it financially.

“I don’t make a living doing this, and I feel like getting to this point is almost impossible. It’s incredibly difficult because, like any creative discipline, you have to spend a ton of time doing something that won’t make you money to get good at it,” Wilson said, adding that residency programs like those at Modern West are therefore essential to broader artistic advancement. “Because we all realize that art is incredibly important culturally, and we always want it to be there for us.”