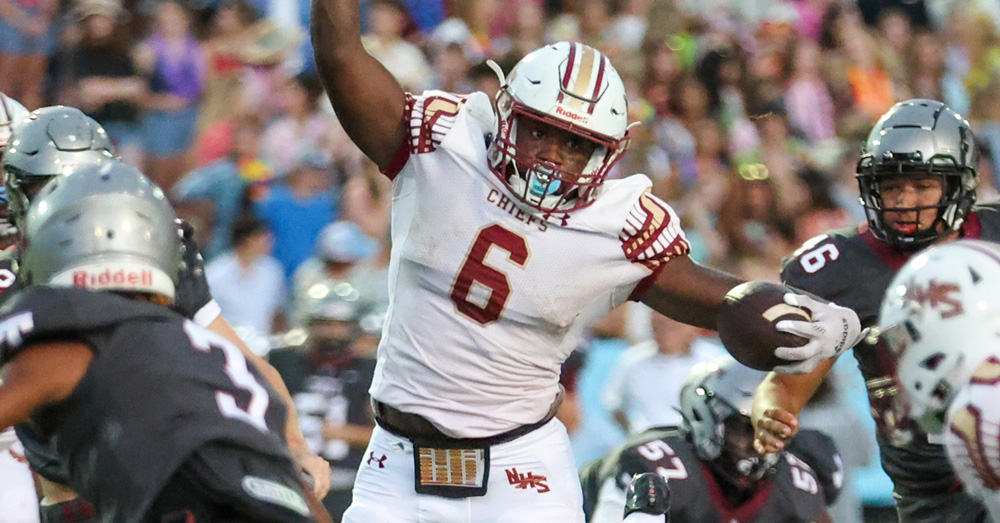 Officially, it was the FFA Ag Bowl with a bell as the big trophy on Friday night. But it was also unofficially the “Summerford Brother Bowl” as the Northview Chiefs beat the Tate Aggies 34-25 at the Tate.

The game featured younger brother Wes Summerford as the three-year-old head coach of the Northview Chiefs, a 1R team at Escambia County’s smallest public school, and Rhett Summerford as the first-time head coach. year of the Tate Aggies from the biggest school in the area.

For an action photo gallery, click here. (Cheerleaders, fans, band and more to come by Monday.)

Wes Summerford said he received a text message with a picture hours before the game that took him back to 2008. It was Wes’ first year coaching, right there with his four-year-old brother Rhett on the pitch at Tate Highschool. “It was a lot of memories and thinking about the things we did together. Even tonight, even though we’re on opposite sidelines…I think we both got it after tonight, so a little competition.

“It’s something special for our family,” said Rhett Summerford. “I’m sure Dad had a good night; you know the two sons…”

Rhett paused, Brother Wes at his side. His voice cracked with emotion. “I like this guy. We are close.

Friday night it rained. He sank. And then it rained again.

The field was a wet, slippery mess. And that could have been a small advantage for the Chiefs, Wet Summerford said. For the past three weeks they have been training in wet, slippery, slippery and muddy terrain at Northview in Bratt.

“It was a good game. It was what you wanted in a football game, it’s raining,” Rhett said. “We’re just trying to improve on the ball.”

“I knew it was going to be a war,” Wes said. “I expect nothing less. Tate has done a great job preparing for us. I have all the respect in the world for their coaching staff and what they do. These guys are going to be good They get there.”

“Big win for our guys. I challenged them all week, playing a 7A team, it’s a big win for our program. This might be the biggest win we’ve had since I’ve been here,” Wes said.

Northview’s Jamarkus Jefferson had five touchdowns for the Chiefs. His first touchdown followed a 24-yard run from quarterback Kaden Odom to the 1-yard line.

“Nothing ever surprises me with this guy,” Wes Summerford said of Jefferson. “Every coach who’s coached against him will tell you the same thing…he’s our ‘Mr. Does It All’. He does a great job. He fights like crazy, and he’s a winner at the end of the night.

“It’s not just Jamarkus though. Their quarterback is phenomenal,” said Rhett Summerford, adding that Northview QB Kaden Odom is the one he would name player of the game. “The quarterback threw us off balance for Jamarkus to get the run. It was Jamarkus, Jamarkus, and then you think you tired Jamarkus, and all of a sudden they go quarterback the other way. It was like a dagger every time that happened.

Tate scored when quarterback Taite Davis found senior Carmelo Campbell for a 51-yard touchdown. Davis also hit Diego Dukes, and he was in for another TD from 12 yards out. Andre Colston had touchdowns for 10 and 53 yards to complete Aggie’s scoring.

And a footnote. As the Friday night winner, Wes expects to see Rhett washing the dishes after Summerford’s Sunday dinner this week.

For an action photo gallery, click here. (Cheerleaders, fans, band and more to come by Monday.)