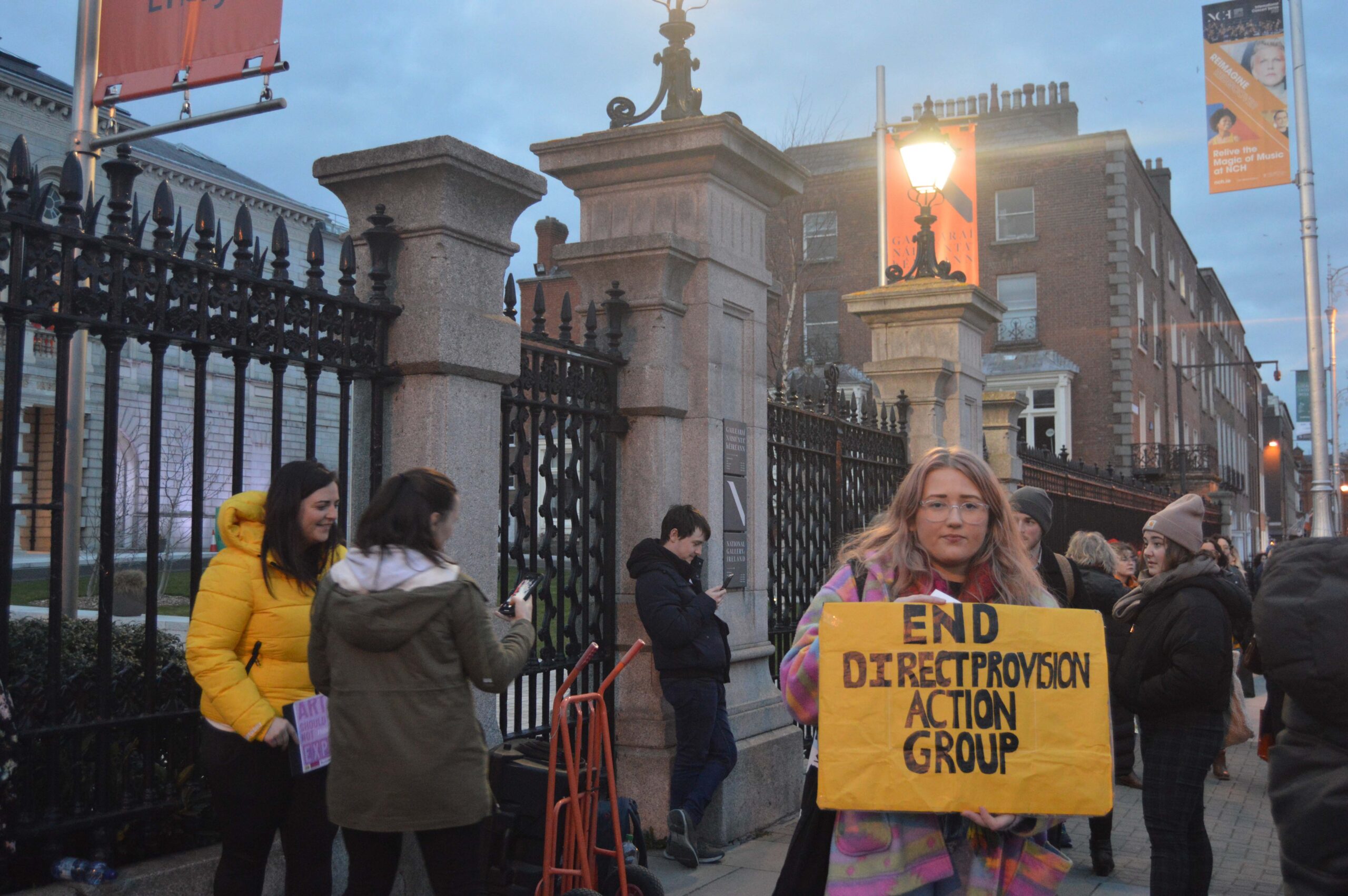 A protest took place outside the National Gallery of Ireland yesterday against its decision to award the mandate for the gallery cafe to Aramark, a company which runs three direct supply centers in Ireland.

The move sparked anger among artists and wider communities in Ireland, prompting some with their work on display in the gallery to have it removed.

The demonstration was led by the action group End Direct Provision and supported by parties such as People Before Profit, MASI and Le Chéile. Paula Martinez, a member of the End Direct Provision Action Group, said the gallery is an important place because “it’s one of the only places [she] can do something cultural and for free”.

An open letter addressed to the gallery’s board and custodians was read out at the protest, which expressed “solidarity with the staff of the National Gallery of Ireland, who courageously opposed what the management of the gallery has awarded the American penitentiary industrial company, Aramark, a three-year restoration contract worth 7.5 million euros.” The open letter also questioned the compliance of the contracting process with the guidelines, as the process stipulates that all contractors must ensure that they will not harm the reputation of the institution.

A statement released by the National Gallery argues the contract was not a misstep, and management is ‘satisfied that the evaluation process has gone smoothly and the contract has been awarded in accordance with the procurement rules’ .

Several artists and members of the public have said that by awarding the contract to Aramark, the National Gallery is disconnected from the public and the artists and has tarnished one of the country’s most beloved public spaces and cultural institutions.

Art historian and activist John Molyneux spoke at the protest about how art over the past 500 years has been a struggle between art for the people and art for profit, highlighting the French painter Gustav Courbet representing workers where before art only represented gods and kings. and Picasso’s Guernica. He then spoke of Jack B Yeats, one of the main features of the gallery’s collection, as a “people’s” painter and asked “where do you think he would stand on this issue?”

There is mass controversy surrounding the catering company due to their alleged mistreatment of asylum seekers living in the direct supply centers run by Aramark. According to action group End Direct Provision, “people benefiting from direct sourcing have gone on several hunger strikes to protest the horrific, non-nutritious food and conditions that these companies have subjected them to for years.”

In a statement emailed to college time, an Aramark spokesperson said: “Aramark is proud of our work and our people at the three direct supply centers we operate on behalf of the Irish State, unrelated to the other 45 centers in operation. . Our services are accredited to the internationally audited ISO22000 and ISO9001 standards, both of which are independently verified.

“The parameters of our contract are set by the state and we provide an important service to the people living in the shelters we operate, as well as to the state. At all times, our goal is to uphold our commitment to treat all of our customers, everyone who uses our services, and everyone who provides services equally and with respect,” Hickey continued.

“Aramark strongly rejects baseless claims that meals provided are nutritionally substandard or culturally insensitive. The internationally audited ISO22000 and ISO9001 standards include independent review of product, food safety and quality standards which may be inspected without notice at any time. Over the past eight years, Aramark sites have also held resident focus groups on menu options to ensure their meal options are culturally diverse and account for any cultural sensitivities that residents might have.

“Aramark is also the only operator in Ireland to offer self-catering options to residents in centers where the infrastructure permits.”

In 2015, there was a one-day hunger strike at Knocknalisheen Asylum Centre, run by Aramark in Limerick. According to Leader of Limerick residents complained about the quality and lack of diversity in the food served to them.

In 2014, residents of another direct supply center operated by Aramark in Athlone were no longer accepting food in protest at conditions at the facility.

Aramark also runs businesses across the country such as Avoca and also operated a cafe in the Trinity building in Hamilton, until the contract ended in 2019. It currently runs canteen services at TU Dublin, despite the student protests and staff members expressing their concerns.

Artists Brian Teeling and Emma Roche, both shortlisted for the Zurich Portrait Prize, have chosen to remove their art from the gallery. It is the dream of many artists to be exhibited in the gallery, which is why the removal of their work has garnered a lot of attention. The painting by Teeling Declan Flynn in Dublin was replaced almost immediately by a portrait of President Michael D Higgins.

In 2019, the gallery held an exhibition called “Something from There” which aimed to shed light on the lives of those living in Direct Provision. Teeling shared with college time that he believes that “the decision to award this contract to Aramark is not only insensitive and odious, but totally disrespectful of the recent work of gallery staff who have engaged with people who have experienced the direct supply”.

Teeling said that “the continued operation of direct supply centers in Ireland, some of which are for-profit and operated by companies like Aramark, is a very dark stain on our country. In the future, we will look back on that time and wonder why we allowed such levels of barbarism, human suffering and rampant profiteering by private corporations”.