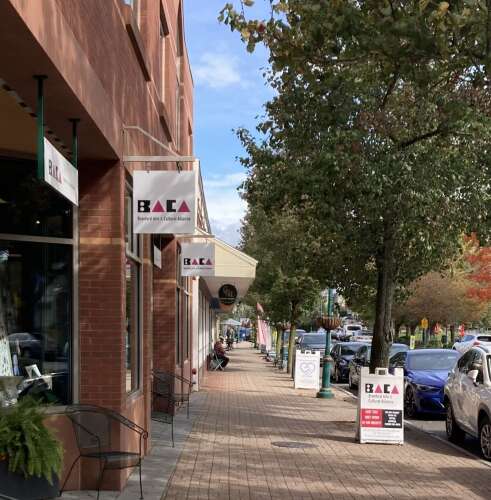 The $70,000 allocation from Branford’s $8.2 million in American Rescue Plan Act (ARPA) funds will go towards strategic planning to develop and expand the Branford Arts and Cultural Alliance gallery space (BACA) at 1004 Main Street as a business entity and economic engine attracting customers. traffic to downtown Branford. Pam Johnson / The Sound

The one-time stipend follows federal ARPA guidelines, as the funding will help with economic recovery from the pandemic. The $70,000 will be used for strategic planning to develop and develop BACA’s gallery space at 1004 Main Street as a business entity and economic engine drawing customer traffic to downtown Branford.

Previously backed in May by a vote of the Board of Finance (BOF), BACA’s request for $70,000 was transformed into a single motion before the RTM on October 12 which sought approval for a total of $95,000. ARPA funding, including $25,000 for a Branford-based Shoreline Chamber of Commerce (SCC) Program.

Combining the two items into one motion, along with seeking additional details from the BACA, caused a problem during consideration by the RTM Ways and Means Committee on October 5, which voted 2- 1-1 to recommend that the full RTM deny both credits.

After hearing the committee’s report on Oct. 12, RTM member Donald Conklin (R, District 5) moved a motion to amend the committee’s motion to deny and instead reinstate the $70,000 demand for BACA and $25,000 for SCC “…as presented and as passed by our finance board,” Conklin said.

Rep. Josh Brooks (D, District 2) offered to defer the item for BACA to provide more information to the GTR Ways and Means Committee.

“Normally people come to us with all the information,” Brooks said. “I guess there would have been more support if there had been more information on the Ways and Means night. My concern about tonight’s vote is that it might fail due to lack of information.

Brooks’ motion to sack failed on a vote. The RTM then voted to support Conklin’s motion to reinstate. Then, before moving to the vote on the main motion to appropriate the funding, Brooks asked for a brief suspension; granted by moderator Dennis Flanigan (R, District 5).

After the break, BACA President Frank Carrano offered the RTM further explanation, in response to “…some of the questions I’ve heard raised tonight,” he said.

Carrano said he thought the RTM wanted to answer four questions: is this an appropriate use of ARPA funds, why is BACA’s budget showing deficits, what would BACA do with the funds, and what use would appropriation be to Branford?

“In the research I have done and the conversations I have had with [Finance Director] Jim Finch and Board of Finance, we were led to believe that the funds were drawn [from] funds that would be used appropriately for economic development,” Carrano said.

He said BACA’s gallery is an “engine of economic development” and noted that 22 downtown businesses have signed a statement supporting BACA’s gallery continuation.

“I went to all the stores [and] everyone said “yes”, immediately… they understood why they had to register. So I felt that validated what we were doing, and it validated what we hope to do to continue doing and improve our action, if we get the funds,” Carrano said.

Regarding BACA’s budget deficits, Carrano said BACA may have been “too cautious” when projecting budgets for the next 3 years; because BACA has already “exceeded our goal” for this budget year’s fundraising. He noted that the fact that the goal was achieved “…in the difficult circumstances we all face financially” suggests that BACA will also be successful with its future goals.

Carrano said BACA did not provide a specific ARPA funds utilization budget because BACA did not have the money on hand. He stressed that the funding will not be used to pay bills or rent; rather, BACA’s intention is to use it to help develop the gallery as a “commercial entity”.

“So we didn’t have a specific expenditure of funds; but we know that the money will not be used to pay the rent; but to do strategic planning that will better position us to continue to successfully grow and develop as a business entity,” Carrano said. “We’re a non-profit arts organization, and now we’re running a business, so we have to be able to learn how to do that. [and] develop marketing… so the money you allocate to us [is] will help us do that.

Carrano co-founded BACA 8 years ago. The BACA Gallery opened at 1004 Main Street in June 2021. Over the past 8 years, Carrano noted that BACA “…has never asked the City of Branford for money. Not a dollar.

In response to “What good is it for Branford?” Carrano said, in part, “…we are, in fact, an engine of economic development [and] I think the benefit would be something that every person living in Branford will get something out of. [We will] continue to help the Branford center grow and prosper. Citizens will be able to enjoy and appreciate the arts. [So] I believe that if you vote in favor of this motion, you are voting for the future of Branford, on many levels.

First coach Jamie Cosgrove also spoke to the RTM on October 12 in support of the award of ARPA funding to BACA.

“I think we have to ask ourselves how do we want to deploy these dollars, what are we trying to accomplish? And I think that not only supports BACA the organization and the gallery, but it also supports the community,” Cosgrove said.

Cosgrove said the BACA Gallery, as a business entity, is a “start-up” that should be supported in its efforts to be an economic driver for the downtown area; and this success will also allow BACA to succeed as a stand-alone non-profit organization.