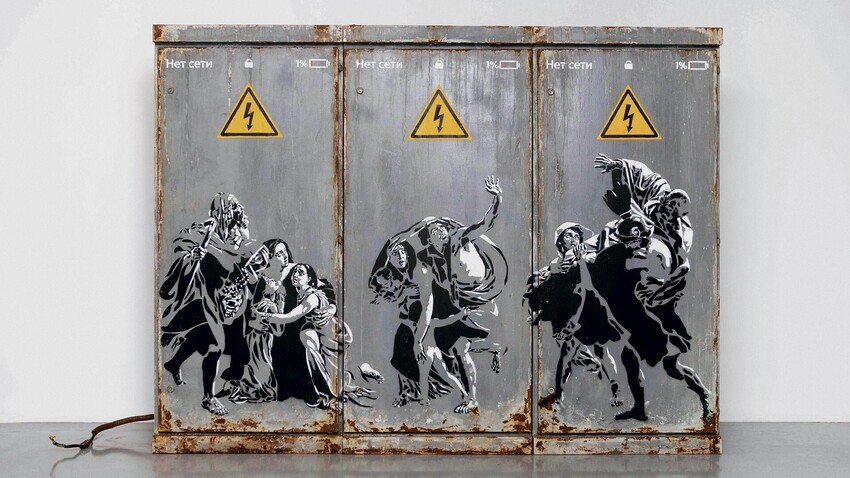 These creative minds used to break the law by “decorating” public places with their graffiti, but the Russian Ruarts Foundation invited these provocative underground artists to be exhibited as legitimate members of the art world.

Street artist Zhenya, nicknamed 0331c, has had solo exhibitions in the past. One is called “Fence” and its slogan is “I am only the letters on the fence”. His work of art is a piece of porcelain in the form of a concrete wall that was common throughout the Soviet Union. (Read the story behind the famous Soviet fence here.)

2. Zoom in. The disaster nowadays

Misha Most is one of the most famous and innovative Russian graffiti artists, and he has already been exhibited around the world. His art shows the many layers and meanings that can be found in a work of street art.

Vladimir Abikh works in many different genres and on the border of multimedia and street art. He questions the place of humans in a virtual space, and the influence that virtuality has on real life.

5. Slava Ptrk. View from the window, from “Gray series”

Justifying the name of the group, the artist collective “Wick” launches a provocative blow on the most vulnerable pressure points in society. Their harsh speech mocks the socio-cultural contradictions in our life.

Dmitri Aske is one of the ideologues of Russian street artists heavily influenced by graffiti. He creates prints, street art, large-scale panels and public works of art. Its incomparable and unique style and technique is plywood mosaic.

Timofey Radya is best known for the lettering he creates in public spaces. “Life is like a video game with no chance of winning”; “I would kiss you but I’m just a text”; “Hey you love me”; and other absurd legends that speak louder than anything. Radya also produces large-scale performances and provocative satirical installations that give us the opportunity to explore the senses in depth. The video performance of his Figure 2 game is available here.

Turben has been creating street art since 2008, and during his creative journey he has tried his spray in many genres and used different allusions. It mixes graffiti, naive, Pop Art and images of mass culture.

Alexei Partola made his debut with a book of black and white photographs of Moscow street artists at work. He also carried out a large-scale survey of Russian street art and published two photo albums, “Wall Elements”.

12. Alexander Zhunev. One hand washes the other

Zhunev draws his inspiration from Pop Art, as well as Banksy’s street art. He used to experiment with different styles before he found his own. Pixel Art has been its main focus since 2013.

The exhibition “True Ly” presents works by Russian street artists and is presented at the RuArts foundation until May 15, 2022

If you use all or part of the content from Russia Beyond, always provide an active hyperlink to the original content.