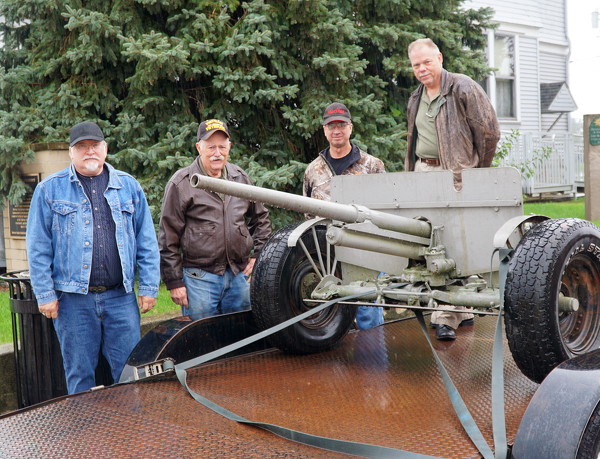 Volunteers from the Soldier’s Museum in Portland, Indiana stand behind a U. .

CELINA – The Soldier’s Museum is said to be more of a ministry than a real museum because of the way veterans tend to talk about their experiences when they walk into the former Coca Cola bottling plant in Portland , Indiana.

â€œI think, in many ways, because of the opportunities we have to talk to veterans, to get them to tell their stories and also to education,â€ said Jim Waechter, museum volunteer and military historian. “I do a lot of talking at schools, organizations and places like this and at least you have the opportunity to give them a little thought about whether or not to look at their family history of military service.”

Waechter and other museum volunteers made their annual trip to the Mercer County Historical Museum in Celina on Sunday to share a display of military training rifles with the public. Outside the museum, they had brought one of two American WWII 37mm M3 anti-tank guns that they plan to restore.

The men also spoke about the Museum of the Solider, a private, non-profit gallery of military artifacts. Volunteers seek to acquire and preserve pieces of military history and to honor the memory of the soldiers who gave their lives in the service of their country.

â€œWe try to do everything veterans related,â€ said Waechter, a Vietnam War veteran. “We try to put names and faces on things and talk about their stories, and we use the artifacts to tell the story.”

Waechter and the founding volunteers Brian Williamson and Michael McBride operated what Waechter called a suitcase museum for many years, going from place to place with traveling exhibitions. In 1997, they found a home in the former Coca Cola bottling plant where they display a collection of world-class military artifacts.

Many items are donated, said Williamson, who spent 31 years in the Indiana National Guard and toured Afghanistan.

â€œA lot of times (an artifact) comes up with a name or just bare information and we end up doing a lot of research and plugging the information into it,â€ Waechter explained.

Through their research, which has grown considerably with the advent of the Internet, volunteers were able to fill in the missing details of a deceased veteran’s military experiences, providing both peace of mind to family members. and documenting the story for posterity.

The museum’s collection dates back to the Civil War, Waechter said, before pointing out an interesting fact.

“The last soldier killed in the Civil War was from Portland, Indiana, and he’s buried just north of town. It was a family cemetery and now it’s part of the county retreat center,” he said. he said of John J. Williams who died in the Battle of Palmetto Ranch near Brownsville, Texas.

Some notable items on display in the museum are one of the phones used by then-President George W. Bush on September 11, 2001, at Offut Air Force Base, Nebraska, and an M-16 magazine carried by US Army Soldier Salvatore Augustine Giunta. during the fight in Afghanistan for which he received the Medal of Honor. The magazine was hit by a bullet from Taliban fighters.

â€œIt’s one of those incredible pieces of history. A local guy was in the same unit as Salvador Giunta. He’s the first living Medal of Honor recipient since the Vietnam War. beaten with the Taliban and they were ambushed, â€Williamson said. “It is an artifact of someone who won a Medal of Honor, who has combat damage from the battle where he won the Medal of Honor.”

In addition to donations, museum officials are looking for objects elsewhere. Waechter and Williams said they found service uniforms at roadsides, in dumpsters and at second-hand and flea markets. They are able to properly display and honor the memories of the people who once proudly donned the uniforms.

“I hear people say, ‘We don’t know what to do with it and our kids don’t care,'” Waechter said discouragingly.

The museum’s ultimate goal, said Waechter, is to preserve history and keep the stories of men and women alive.

â€œIt’s about getting people to remember and also trying to get veterans to tell their stories,â€ he said. â€œSo many times we do an exhibit and someone will tell us something and the family will say, ‘We’ve never heard this story before,’â€ Waechter said.

He also urges children who attend presentations to learn about their own family’s military service history.

In many cases, veterans are reluctant to tell their story. But in places such as the museum or Foreign War Veterans or American Legions, among other veterans with shared experiences, they are more likely to disclose their war memories, the two said.

For more information on the Soldier Museum, visit museumofthesoldier.info.