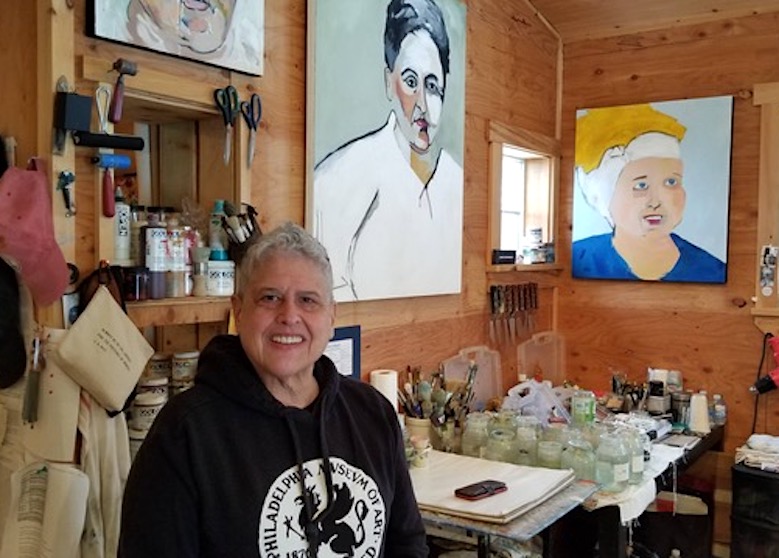 STOCKBRIDGE WEST – Last summer, artist Ilene Spiewak oversaw the professional crating of a self-portrait at her garden studio in Berkshires, in preparation for shipment to the nation’s capital. Later this month, she will see it for the first time since – among the works of 41 other finalists, selected from 2,700 total submissions – at the Smithsonian’s National Portrait Gallery in Washington, D.C. “The Outwin 2022: American Portraiture Today,” will be open to the public on April 30 and through February 26, 2023 before heading to other U.S. cities. Spiewak will attend the exhibition’s invitational opening on April 29.

“I was just totally shocked!” Spiewak told The Edge that he was named a finalist, after responding to a call for entries more than two years ago. “I felt like I had nothing to lose,” added the artist, who never stopped painting during the pandemic and, on the contrary, became more prolific at a time when daily life was largely disturbed.

“My studio was the one constant thing I could count on, and I really started to focus my work inwards,” said Spiewak who, citing the lack of opportunities to exhibit his work at the time. , considered submitting a piece despite the high fees to do so. Then she turned her attention to writing her choices.

“I had really just finished this self-portrait and was working on another one that wasn’t quite finished,” Spiewak said of his work which, under Outwin’s strict guidelines, will remain secret until April. opening of the show. The protracted process was equal parts time and luck. Although Spiewak never focused on portraiture, she painted her own for the first time when she was 21 years old. After her grandparents and parents died, she also painted their portraits, “as a way to go through the grieving process”.

Several years ago, after earning his MFA from the Pennsylvania Academy of Fine Arts, his whole approach to painting changed. “[Soon] I painted my friends. I was painting my companion, who is my muse… I realized that I was just fascinated”, says the artist. Submission guidelines encouraged artists to challenge traditional definitions of portraiture; that, to Spiewak — who identifies as an older student — was a no-brainer.

“We all break down a little every day, and [as an artist] I look at the aging female body: the wrinkles, the gravity, the scars, all those things,” Spiewak said of what makes her portraits distinct. In fact, “they’re not very pretty, they’re not flattering, they’re over the top…meant to go beyond what anyone looks like,” she said, citing that, from a feminist perspective, there is still work to be done.

“Women still face the same issues…especially aging women… [and] no one is watching us anymore,” said Spiewak, whose goal is to grab the viewer’s attention, which she more than achieved given her recent accolades. While Spiewak’s portrait remains out of the public eye at present, his artist’s statement offers insight into his creative process:

I love the gestural feel of painting…the feel of a heavily loaded brush in my hand.
I use my hand and my brush in fearless narrative isolation.
The visceral and muscular handling of paint on canvas matters to me.
Paint matters.
The painting is alive and reactive.
The painting is sensual.
Color is emotional.
Melancholy.
The painting has no age bias.
No gender bias.
No racial prejudice.

Spiewak has a BA in Art Education, an MFA in Art Therapy and received her MFA in 2017. She has worked as an art therapist in a psychiatric hospital and as an art teacher in a alternative secondary school. After moving to the Berkshires in 2008, Spiewak worked at the Brien Center and the College Internship Program. She is a board member of the Berkshire Art Association. His paintings have been exhibited in group and individual juried exhibitions in the Northeast. She paints every day in her little red studio, where visits are by appointment only. Follow her on Instagram @spiewakilene.