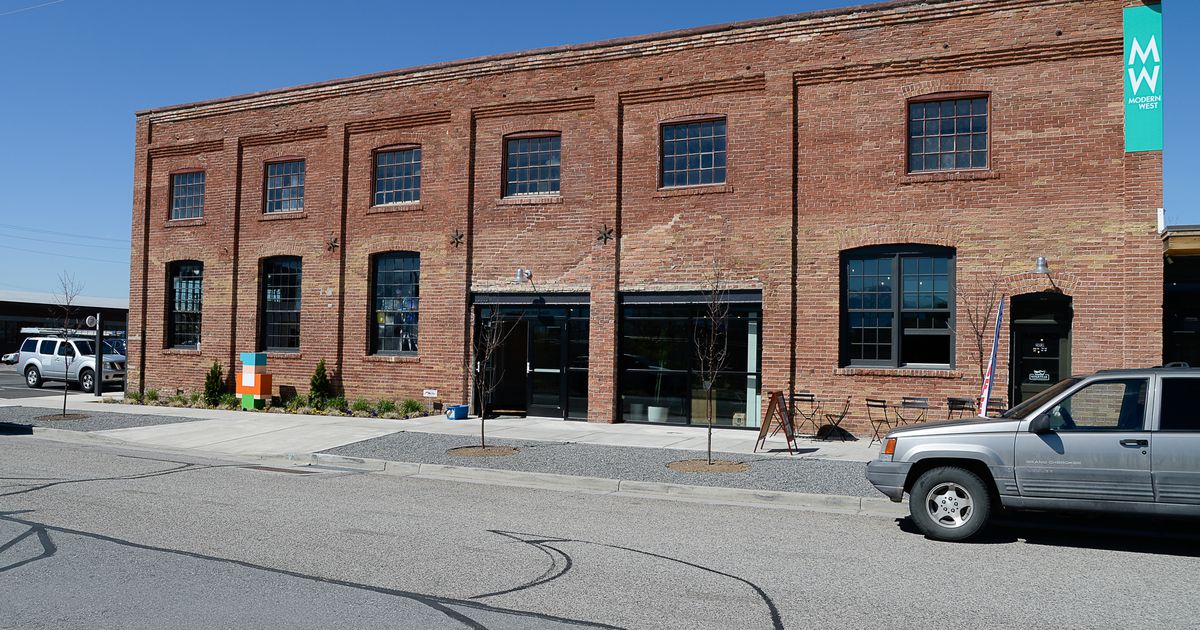 Activists, however, question why the gallery didn’t act sooner – and it was only after hearing their criticisms that the artists represented by the gallery acted.

For Denae Shanidiin and Kalama Ku’ikahi Tong, some of the artwork posted on the website of Modern West Fine Art in Salt Lake City, 412 S. 700 West, was triggering and insensitive to Indigenous peoples.

One of the works, titled “Oh My God”, depicts a white woman and an Indigenous woman standing side by side as military planes drop bombs over Monument Valley. In the all caps bubble, the white woman asks the native woman, “OH MY GOD!! WAS THIS YOUR VILLAGE? The characters seem to be taken not so much from reality as from an old Hollywood movie, with stereotypical costumes.

Another work showed a naked Aboriginal woman, wearing a headdress, in a canoe. Yet another depicted spiritual deities, such as the Ahola Kachina, which Shanidiin and Tong viewed as cultural appropriation and abuse.

The works in question were created by Billy Schenck, a pop artist who has been called “the Warhol of the West” by the Southern Utah Museum of Art, who mounted a Western-themed exhibit of his work with Andy Warhol more early this year. According to Castle Fine Art, Schenck’s art merges “Navajo culture, modern cowgirls, and wry humor.”

Shanidiin, a Salt Lake City artist who is Dine and Korean, and Tong, who is from the island of Hawaii, argue that Schenck’s work is dehumanizing, sexually abusive, stereotypical and culturally appropriation – taking advantage of indigenous cultures. of the southwest, especially the Diné or Navajo culture.

The sexual aspects of Schenck’s work, Shanidiin said, are particularly alarming, given recent attention to the plight of missing and murdered Indigenous women and girls (MMIW). Shanidiin and Tong hosted events to mark MMIW Day, May 5, in Salt Lake City, raising awareness that Utah is one of the top 10 states in the nation for missing and killed Indigenous women and girls – with higher rates than other racial groups.

Modern West represents a variety of Indigenous artists, including artists Diné Shonto Begay – whose work is featured in an online exhibition on the gallery’s website through May 31 – as well as Sheldon Harvey and Patrick Dean Hubbell, who are from Navajo Nation.

“Every Aboriginal artist in this

is a victim of this colonization and genocide” depicted in Schenck’s work, Shanidiin said. “They are inherently in danger being in this gallery, juxtaposing their sacred work and livelihood alongside that of Billy Schenck.”

Diane Stewart, owner of Modern West and a key figure in the Salt Lake City art community, has confirmed that the gallery has ended its ties with Schenck.

In an emailed statement to the Salt Lake Tribune, Stewart said the gallery does not support the exploitation or victimization of Indigenous people.

An April 29 post on the gallery’s website, signed by Stewart and gallery director Shalee Cooper, acknowledged that “the lack of curation with Billy’s latest film [online] show was a huge mistake on our part. Proper curation would certainly have provided us with the information needed to see how the work falls short of our community standards, nor of the gallery’s standards.

The message states that the gallery will “pause our performance of Billy Schenck. We are taking this hiatus from all his work to understand the depth and breadth of the effect his images have on our community.

In his statement to The Tribune, Stewart said, “We hope discussions around this experience will inform and raise awareness about the changes needed for more sensitive and equitable treatment of Indigenous populations. These are very important and important issues that cannot be solved by the gallery, or even the art world alone, but we hope we can do our part to rebuild trust with a new, more informed perspective.

Schenck, who lives in Santa Fe, New Mexico, did not respond to attempts by The Tribune to contact him. In a recent painting, Schenck depicted a woman, terrified with her hands holding a rope behind her and speaking into a telephone: “Oh, Jesus! The woke police are here!

In its April 29 post, the gallery solicited comments from other artists.

Laura Sharp Wilson, who identifies as white and recently completed a residency at Modern West, said she’s been thinking about her involvement with the gallery — and learning about cultural sensitivities in the art world.

“I have a big revelation that white people need to do a lot more work and native people, BIPOC people shouldn’t have to do all the work,” Wilson told The Tribune. “It also made me realize that white people have learned to be blind to this stuff, and that’s why we still talk about it.”

Sarah Hollenberg, who teaches art history at the University of Utah, said part of her job is to teach students to “recognize and begin to untangle the ugly mess of stereotypes, racism and misogyny embedded in their historical and contemporary visual culture”. She added that Modern West’s choice to represent Schenck “makes my job more difficult. He tells budding artists, art historians, educators and future leaders that when it comes to representation, it’s okay to look no further than the same old colonial narratives.

Before Modern West cut ties with Schenck, Shanidiin questioned the gallery’s rhetoric protecting the artist — and noted that it needed public comment from Salt Lake City’s art community to call out the content of the work. of Schenck.

Stewart told The Tribune that she and Cooper sought this feedback from local artists and acted thoughtfully but not slowly after initial complaints from Shanidiin and another artist. They took two weeks to seek comment, she said, and another week to finalize their decision to cut ties with Schenck.

Shanidiin is an artist herself – one who chooses not to be represented by a major gallery – and her inspiration comes, she says, from her people and the landscape. She contrasted this with Schenck’s work, which she called “threatening and controlling narratives about Indigenous land, body, identity, and art.”

Patch • An earlier version of the story incorrectly described where Billy Schenck’s art was displayed. According to Modern West, it showed landscapes by Schenck in its Salt Lake City gallery, but the works that drew criticism were only shown online.