Where art meets fashion and politics 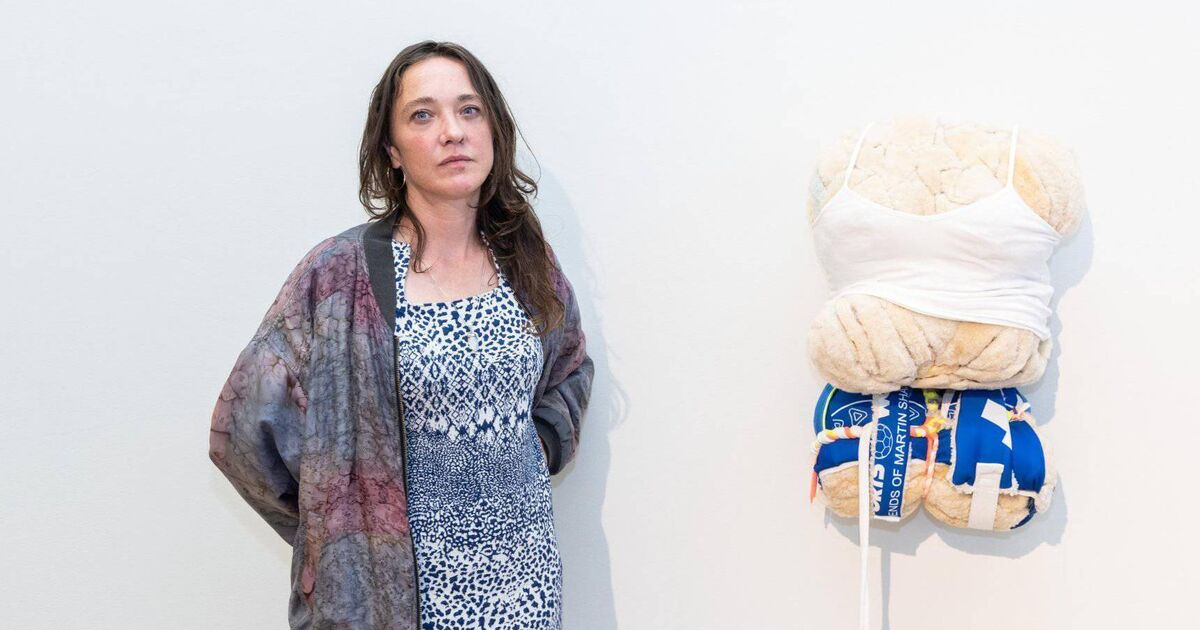 Where art meets fashion and politics

As you might expect, there’s an awful lot of clothes in Fashion Show, the current exhibit at UCC’s Glucksman Gallery. But, far from being a celebration of couture style, it is fashion as hijacked by contemporary visual artists as a means of activism and protest. Thus, the Russian artist Gluklya Pershina creates an installation of t-shirts to protest against the election of Vladimir Putin to the presidency, and the Chinese director Wang Bing presents 15 hours, a documentary which highlights the poor conditions experienced by the workers at a garment factory in Zhejiang province.

Irish artist Sybil Montague, originally from Cork and a graduate of Chelsea College of Art in London, is also interested in making clothes; her two pieces presented in the exhibition are sculptural works that she calls “covers”.

“I started working with clothes and other materials at the end of their life cycle,” explains Montague. “Take them apart to see how they were originally put together, then sew them back together. I was drawn to the slowness of the stitching. Traditionally, it was a woman’s job, and a domestic activity. I wondered a lot who originally made these materials.

For the past three years, Montague has worked at Temple Bar Studios in Dublin, on a residency that will culminate in a solo exhibition of animation and sculpture titled Worm Stitch In December. Previously, she had researched the National Archives of Folklore, and her interest in Irish native culture fueled the creation of her ‘covers’.

“Each material has its own identity,” she says. “Most of the blankets I’ve used are lambswool, and typically Irish. I also used GAA tops and Primark t-shirts. The works are textile collages, if you will. If I had hung them on the wall, they might be mistaken for tapestries. But I didn’t want them to be seen as some sort of rarefied art object, so I put them on the floor instead.

Montague was asked to contribute to the Fashion Show based on work she had already produced. “I made these covers during the Covid lockdown, so it’s interesting now to see them in a group show. The work often takes on a new resonance in that context. I guess the most striking thing about Fashion Show is that it is so political.

The politics explored by Viennese artist Anna-Sophie Berger in The Wearer of Clothes, a half-ballgown, half-tent sculpture, is unmistakably sexual. “The idea is that the work is both active and passive,” explains Berger. “It’s inviting someone up your skirts to protect you, but it’s also the space where the genitals are, so that’s also where sexuality could happen. The title I gave at work – The Wearer of Clothes – is quite poetic; I didn’t want to feminize it because it’s a dress, an object that is already, at least historically, seen as feminine, even if that changes now, thank goodness.

Berger’s background is in fashion design. “When I started my studies, I had no preconceived ideas about the divisions between fashion and art,” she says. “I was raised in a family where the emphasis was on a humanistic upbringing, so my learning of art was from a classic bourgeois notion of beautiful things and creativity. Of course, I have understood that being a fashion designer was not the same as being a painter, but when I enrolled in college, I chose fashion because it seemed like the most exciting option.

Berger devoted six years to her fashion studies, but always with the hope that she would become an artist rather than a clothing designer. “I was not going to Paris to work in industry. I knew I was too hedonistic to simply create a product to give to others as an expression of their own character. So I went into fine art because I realized that was what I wanted to do.

Fashion is often seen as a more overtly commercial form of creativity than the visual arts, but Berger isn’t sure there’s such a sharp divide. “There’s this idea that fashion is more open about her relationship to money and commerce, that she’s the most honest bitch, so to speak. But I don’t know if there’s a real conflict, or if, in the end, there’s actually a lot of difference.